a splendid, sinister, dying mars:
s m stirling's
in the courts of the crimson kings

If you're looking for a neo-OSS Mars, with realistic shield volcanoes yet a traditional Burroughs-style breathable Martian atmosphere and anciently civilized humanoid inhabitants, this could be the book for you.

Harlei:  You mention Burroughs, but I'd say Stirling's Mars is more in the Leigh Brackett line of descent. 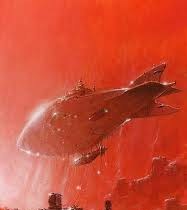 Zendexor:  More sinister, you mean?  Ah, but they have fliers...

Harlei:  Not in the happy-go-lucky ERB sense, they don't.  The whole tone is far more LB than ERB.  And here's a striking parallel.  Remember the eerie dead city in Brackett's The Secret of Sinharat?

The evening wind sprang up and touched his face.  Suddenly, he stopped.  he had heard a sound that began as an inaudible vibration and rose stealthily into his hearing.  A whispering, a vast, vague murmuring that came from everywhere and nowhere, so that it seemed that Sinharat was no only listening and watching, but was now speaking also...

Stark caught Fianna's arm.  "What is it?"

"The voices of the Ramas."

She shrugged.  "So all Drylanders believe.  That is why they hate to come here.  But others have said that it is only the wind that sings in the hollow coral."

Stark understood.  The massive coral pedestal on which the city stood was indeed a vast honeycomb of tiny air-passages, and the wind forcing up through them could create this eery effect.

Now we proceed from Brackett to Stirling:

"Why's the growth concentrated around the towers?" Jeremy asked Sally.  "Though that's pretty sparse to call concentrated.  More of a 'very thin' as opposed to 'nothing'."

"The towers have - evidently did have even back when this place was built - systems that suck what water there is out of the air.  It's a supplement to canals and reservoirs.  That would keep some life going."

Winds cracked the sail taut and wailed mournfully through the thin lines of the rigging; beneath that was the hiss of sand like abrasive talc, and beneath that, the deep, irregular sounds the air made as it wove through the ruins and hooted through their twisted passages... 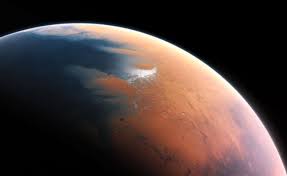 Stid:  Before we go all dry and dusty, I'd like to point out that in one respect SMS' Mars is a lot more Earthlike than either ERB's or LB's.

Harlei:  Indeed, that could make a huge difference to the look of it from space, as you approach the planet.

And yet, though it has that much water, it's still a dying planet.  As the Martian heroine says:

"...Cycle upon cycle of years passed, and with each, the Deep beyond grew more and water and life grew less, little by little but steady and very sure.  Sibling fought sibling for the Ruby Throne, and canals died, and cities fell, and generals rebelled, and the nomads pressed inwards from the deserts and down from the heights, until nothing was left but the shards of a broken world.  A world where winter comes, and will not yield again to spring."

Edgar Rice Burroughs, who usually deals in fairly round numbers, sets the future death of his Mars roughly one million years ahead.  Stirling's Mars has a lot less long to live.

"...The Tollamune savants deduced long ago that in as little as twenty-five thousand years from the present - "

Fifty thousand Earth years, he translated to himself.  Roughly.

" - this globe will no longer be capable of supporting higher forms of life.  Long before then, civilization and its arts will die..."

These points come up in dialogue, but we also learn much more of Martian history from the imaginary quotations from reference sources, with which Stirling has the good habit of beginning his chapters.

Zendexor:  I'm like you, Harlei: indeed when reading Stirling I look forward with special delight to the next chapter and its introductory essay-fragment.  It's as well done as Jack Vance does it in many of his novels.

I want to add, though, regarding the imminent death of Mars, that it may have been averted at the end of the book.  Something is being done by then, apparently, to revive the Martian environment.  Newly discovered alien technology is being brought to bear on the problem...  so that's another difference between SMS on the one hand, and ERB/LB on the other.  Mars may be renewed!

Stid:  Well, why shouldn't SMS be different from the other authors?  Treat him as a gang of one...

Zendexor:  But remember, he invites the comparisons himself.  Though he is inventing his own Mars, he is also voluntarily and consciously writing within a certain tradition.  He deliberately fascinates in the new take he gives to old themes: for instance, slavery on Mars.  With Stirling it's not the subjection of equals but the use of genetically bred sub-men.  Still morally dubious, but not the same as in ERB.

And then there's the princess.  You know, Stirling's a sly one!  I read most of the book before thinking: hey, I'm reading about a Martian princess!  Somewhat more mistress of her own fate, maybe, than was Dejah Thoris.

Stid:  More forward, too, in matters of the heart.  Not traditional ERB style at all.  In fact, Harlei, in general I can't imagine you liking Stirling's Martians very much.  Wooing apart, they're a sinister lot.  A far cry from your companionable heroes, the red men of Barsoom. 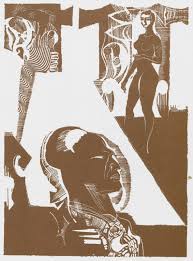 ...when Martians decided to be nasty, they could be very nasty indeed.  This culture wasn't long on empathy at the best of times; he suspected that the emphasis on genetics tended to make them indifferent to individuals.  Perhaps the fact that, as far as anyone could tell, they'd never had anything resembling a religion or a belief in an afterlife had something to do with it as well.

Zendexor:  Agreed, there's a distinct lack of cuddliness about Stirling's Martians.  This comes out in their expressions, or rather, the lack of them:

...The inhuman visage of the chieftain wasn't designed for showing emotion; Jeremy couldn't tell if the tooth-bearing grimace was anger or frustration or fear or amusement.  The only question it definitely settled was that the nomads were designed to be meat eaters.

Harlei:  Now you're both looking thoughtfully at me.  All right, all right, I admit that I find SMS heavy going, if I'm in the mood to focus too much on the ERB tradition.  But then another mood comes along and I say to myself, hang on, it's stupid to view Stirling in ERB's terms.  Even if you regard a book as just a bundle of influences, ERB isn't the only influence on this one, nor is Leigh Brackett.

Stid:  Let's play the game of spotting influences, then.  Or - since you can rarely be certain of an influence - call them 'parallels'.

Zendexor has mentioned the parallel with Vance's chapter-introductions.  Let me draw attention to the humour in Stirling - very Vancian as regards the dry, polysyllabic dialogue with its incongruous juxtaposition of raging emotion and flat tone.  It's those up-tight Martians controlling their emotions.

..."Even so, Supremacy" - extreme deferential mode, with emphasis on nonironic intent - "problems of management present themselves."

"Death presents one with few managerial dilemmas, yet it is generally believed to be less desirable than the wearisome complications of continued existence," Sajir remarked dryly.

"I will implement the Tollamune will," Chinta said, adopting a pose of submissive obedience...

Zendexor:  And this theme extends amusingly into the topic of bad language in Martian - there doesn't seem to be any:

He stumbled again on an irregularity in the tunnel floor and cursed.

He did that in English.  "Consanguineously mated male offspring of a domestic canid" just wasn't very satisfying when he stubbed his toe.  Neither was "excrement!" or "feces!".  And shouting "I feel extreme annoyance" didn't do it for him at all, when you came right down to it.  Swearing in a language without taboos was hard.

Note how seriously relevant this apparently light-hearted humour is to Stirling's portrayal of the culture of Mars.

For purer light-heartedness you can read the novel's scintillating introduction - the scene set in the World Science Fiction Convention, Chicago 1962, on the day when (on this timeline) the results are coming in from the first Mars lander.

It's a wonderful scene, in which the assembled authors feel vindicated in their imaginings, and Leigh Brackett triumphantly declares that she'd told them, years ago, what it would be like...

Stid:  Yet were they right, really?  I want to sum up this page, if I may.  In the Courts of the Crimson Kings is partly a commentary on earlier versions of Mars, but mostly it strikes out on its own.  It's a serious creative effort in its own right, more than it is an offshoot of tradition.

Above all it is a study of how a world without great mineral resources impels its intelligent inhabitants to make full use of their biological resources instead.

Teyud slid down from her perch high on the mast.  Jeremy hid a slight shudder as she peeled the vision device from her face; it looked like she was being hugged at eye level by a semitransparent octopus with waxy skin and an unpleasant pinkish tinge spreading through its veins and capillaries.

The thing scuttled into its container at her belt, filling it like a viscous fluid, then darted a tentacle back out, grabbed a handle on the underside of the lid and slapped it shut with a sharp click.

Damned if I'll ever like equipment that drinks your blood, he thought.  Even if that does make it... loyal.  Give me plain old electronics and optics any day.

With this emphasis on bio-engineering, Stirling's Mars is a bridge between the Brackett Mars and the sort of biotech civilization depicted in Harry Harrison's "Eden" trilogy.

Harlei:  And talking of bridges, it's also a bridge between the Schiaparelli-Lowell-Burroughs Mars of canals, and the Mariner-Viking-actual Mars in which Olympus Mons is the loftiest peak in the System - the mountain in which, so we learn, the Martians built their Great City.

His first sight of the City That Is A Mountain left him numb, if that wasn't just the cold.  It was too big to take in; mile upon mile of the four-thousand-foot cliff at the Mountain's edge sculpted into towers and domes, avenues and colonnades, terraces and gardens that were shouts of color and trees impossibly tall and slender, even fountains and artificial waterfalls - an incredible extravagance on this world.  In the center, where the cliffs had swerved out into the lowlands like the prow of a ship, was one impossible spire than ran from base to summit, a mile of stone crimson as blood, shaped like a frozen tendril of fire, the Tower of Harmonic Unity.  The Tollamune emperors had commanded its shaping when they united and ruled a world, in the days long before earthmen first put words to clay, or built anything grander than a thatched hut.

For comment on this page see The Crimson Courts and My Martian Dreams.

For the prequel, Swords of Zar-Tu-Kan, see A Coercive of Mars.

And see the extract, Motto of the Martian Emperors.

› In the Courts of the Crimson Kings