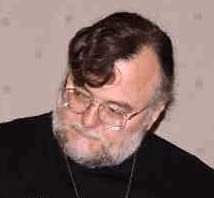 Stirling is one of the few, the very select few, twenty-first century novelists who have done their bit to resurrect production of Old Solar System yarns.

Mars:  the novelette Swords of Zar-Tu-Kan and the novel In the Courts of the Crimson Kings.  (The novelette is a prequel to the novel.)

Affectionate references to the tales of Edgar Rice Burroughs abound in SMS' work, which, however, is infinitely distant from being any kind of pastiche.

Stid:  I'm glad you're quick off the mark in pointing that out, Zendexor, because this is an author who needs to be assessed in his own right...

Zendexor:  I wouldn't dream of doing anything different!  You couldn't get any further from the Lin Carter Jandar of Callisto approach, whereby an inferior author sets out unsuccessfully to copy ERB's style.  I'm not saying the Jandar books are a complete waste of time; but Stirling, quite rightly, doesn't even try to set out on that road.  He isn't interested.  And yet, and yet -

Harlei:  Yes?  Come on, Zendexor, admit it - the comparison with Burroughs is important.

Zendexor:  I was just about to say:  What does interest Stirling, is not pastiche but parallelism - the chances of gaining access to some ERB-like features by a different route.

Zendexor:  Via explanations which give us more grounded access to some of the themes of ERB-type literature.  In this way he circles round, by a more detailed scientific and realistic route, eventually to meet the tropes which ERB reached through his merely perfunctory science and his vivid but dreamy visions.

In our pages for The Sky People and In the Courts of the Crimson Kings we'll be examining more closely how Stirling produces his effects - but still, let's look at an example right now. 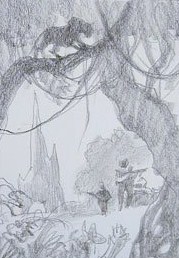 In The Sky People we're given a lush, fecund Venus with an ecological jumble that resembles the gorgeous time-mix of Pellucidar - men co-existing with sub-men, primitive mammals and dinosaurs.  Now, compare the way the two authors justify this anachronistic situation.

Burroughs in his portrayal of the inner-Earth world would have us accept that its eternal sunshine, and thus the lack of sequential day and night, somehow confers immunity from the ravages of Time.  In a certain mystic sense, Time "does not exist" in Pellucidar.  We therefore needn't be surprised at cave-men fighting pterodactyls.

Stirling reaches similar effects on Venus by an entirely different premise.  His books are based on the idea that some time in our prehistory, aliens seeded Mars and Venus with life-forms from Earth -

Harlei:  Hey, Zendexor, this implies a flagrant case of COMOLD - the downgrading of a world's people to the status of mere bio-colony.  A sad come-down compared to the "real" human Venusians of Perelandra or Amtor.

Zendexor:  I know, I know, that was my attitude before I actually read Stirling.  Now, though, the exuberant detail of his books has won me over, to the extent that I enjoy them sufficiently on their own terms, so as to be able to make two replies to my own COMOLD-based objection:

First, a vast amount of time has passed since the "seeding", easily enough time to evolve separate cultures that can count as native by reason of long adaptation.  If we can admit that there are such beings as real Australians or Americans on Earth, surely there are real Venusians on Stirling's Venus.

Second, a lot of his creativity goes into depictions of the natural environment.  Of course this also is "artificial" in the sense of having been "seeded" long ago, but the basic terraforming is much older than the introduction of humans.  Hence the giant saurians.  Nature has had all the time since the Jurassic to evolve a Venusian character on Venus.  Great divergence is bound to occur, especially as Stirling's Venus is a more violent planet than Earth, more infused with energy from a closer Sun.

...The airship had VPS - Venus Positioning System - and satellite weather coverage direct from orbit...  an excellent real-time view of the huge, bruiselike, circular storm that was heading their way out of the north-polar ocean.  On Earth they might have called it a typhoon or a hurricane, but the similarity was only a general one.  Weather was a solar-driven heat engine.  Venus got more solar insolation than Earth, and stored it in a thicker atmosphere; winds blew harder, and seas ran higher...

Stid:  "Weather was a solar-driven heat engine" - you'd never get Burroughs saying that.

Zendexor:  Agreed - you wouldn't.  That sort of fun-didacticism is more Asimovian.  But Stirling does also give us the sensuous lushness of Burroughs - in fact, more so.  Take the following Martian odours from In the Courts of the Crimson Kings:

There was a faint smell in the air of things like burnt cinnamon and something halfway between hibiscus and clove, of acrid smoke, of sweat that was harsher and more concentrated than that of his breed because it wasted less water.

Stid:  Point taken - you'd never get Burroughs saying that, either.

Zendexor:  Stirling goes way beyond the Burroughsian to give us a Vancian level of cultural detail.  To do so without overloading the narrative with explanation, he has recourse to skills that Burroughs did not need - I am thinking now of the ability to weave explanation in with dialogue and with interspreading thoughts and descriptions, so that the story can begin in medias res without lengthy build-up.

Harlei:  Are you respecting Stirling more than Burroughs, then?

Zendexor:  No, because they are too different - Burroughs is the great naïf dreamer; Stirling is a realist, with only one deliberate concession to dream, namely, the setting of his exotic alien worlds in the Solar System.

But that exception is vitally important.  The Old Solar System setting is crucial because it enables Stirling to tap into a well of myth and fascination, to voice the hope: old dreams can be made to fit...

Stid:  You can't keep a good dream down, eh?  Well, who knows what may happen one day, if we get as much power as Stirling's hypothetical "Lords of Creation"?

Zendexor:  The final step will come when "reality engineering" becomes retrospective, as in Uranian Gleams...  That will dispose of the COMOLD objection once and for all.