the good, the bad and the numinous:
perelandra by C S Lewis

After all it's a hard topic to tackle without either being banal or incurring the accusation of "preaching".

Zendexor:  Which, if you think of it, ought not to be an accusation - except that, of course, by "preaching" people really mean "unsuccessful preaching".

Now and then it might be a good idea to imagine what it might be like to experience successful preaching - that is, to have one's awareness really fired up by insights into good and evil.

Stid:  The awareness is all right; what people don't want is the exhortation.

Zendexor:  Ah, but the exhortation becomes implicit in the white heat of the awareness.  After all you don't need to tell a person to love the loveable or devour the delicious.

And as for what you should not do, it's likewise Lewis' achievement to build up the force of this implicitly, too.  He accumulates it like an electric charge: it builds up and up in his spellbinding picture of the numinous, prelapsarian environment of Venus.  And then he releases the force with a jolt equivalent to an electric shock.  For example: 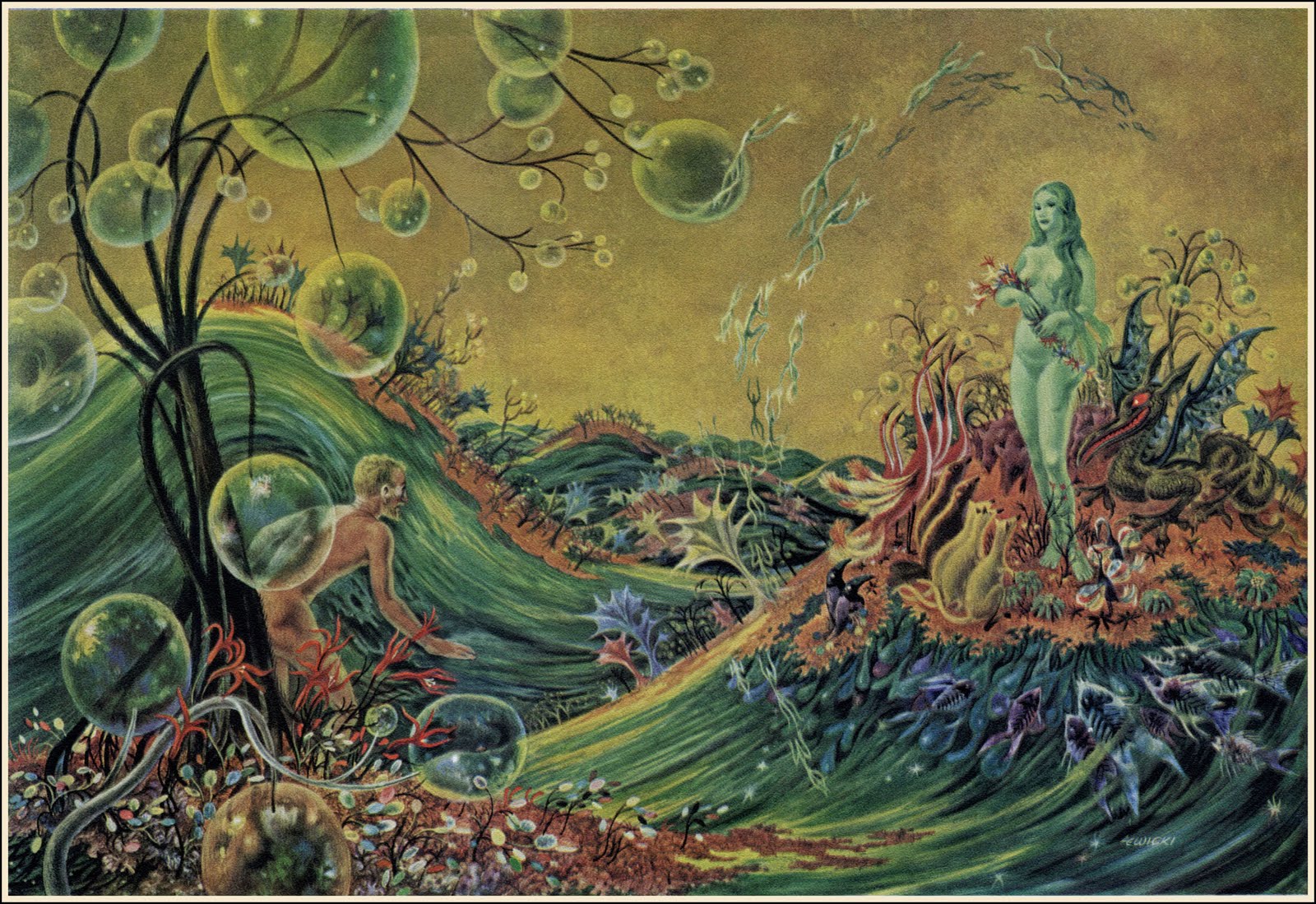 Eve of Perelandra by James Lewicki

"But are you happy without the King?  Do you not want the King?

"Want him?" she said.  "How could there be anything I did not want?"

There was something in her replies that began to repel Ransom.  "You can't want him very much if you are happy without him," he said: and was immediately surprised at the sulkiness of his own voice.

"Why?" said the Lady.  "And why, O Piebald, are you making little hills and valleys in your forehead and why do you give a little lift of your shoulders?  Are these the signs of something in your world?"

"They mean nothing," said Ransom hastily.  It was a small lie; but there it would not do.  It tore him as he uttered it, like a vomit.  It became of infinite importance.  The silver meadow and the golden sky seemed to fling it back at him.  As if stunned by some measureless anger in the very air he stammered an emendation:  "They mean nothing I could explain to you." 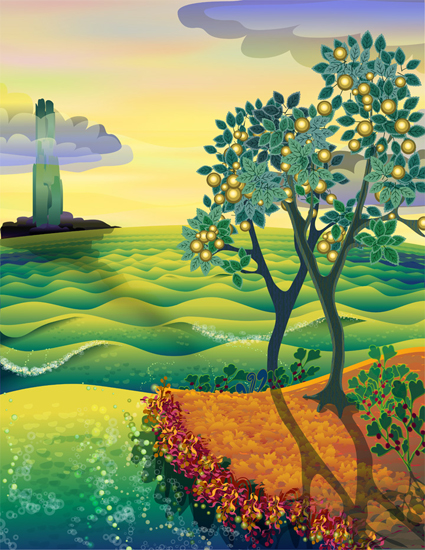 Zendexor:  Yet however brilliantly this kind of operation is carried out, and no matter how deeply Lewis goes into the issue of the conflict between good and evil, he's on record as stating that his main motive for writing the book came from an impulse to have fun with the depiction of a world of floating islands.

He says so in the recorded conversation between himself, Brian Aldiss and Kingsley Amis, published under the title Unreal Estates:

LEWIS:  The starting point of... Perelandra, was my mental picture of the floating islands.  The whole of the rest of my labours in a sense consisted of building up a world in which floating islands could exist.  And then of course the story about an averted fall developed.  This is because, as you know, having got your people to this exciting country, something must happen.

ALDISS:  But I am surprised that you put it this way round.  I would have thought that you constructed Perelandra for the didactic purpose.

LEWIS:  Yes, everyone thinks that.  They are quite wrong.

"Everyone thinks that"... yet any reader ought to sense the sheer joy Lewis had with conjuring up the physical side of this story.  Here's how the islands' surfaces undulate hugely when the ocean waves are huge beneath: 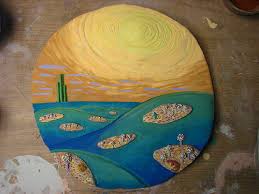 ...He was looking up a long lonely valley with a copper-coloured floor bordered on each side by gentle slopes clothed in a kind of many-coloured forest.  But even as he took this in, it became a long copper-coloured ridge with the forest sloping down on either side of it...

...And then for the next hour or two he was teaching himself to walk.  It was much harder than getting your sea-legs on a ship, for whatever the sea is doing the deck of the ship remains a plane.  But this was like learning to walk on water itself.  It took him several hours to get a hundred yards away from the edge, or coast, of the floating island; and he was proud when he could go five paces without a fall, arms outstretched, knees bent in readiness for sudden change of balance, his whole body swaying and tense like that of one who is learning to walk the tight-rope.  Perhaps he would have learned more quickly if his falls had not been so soft, if it had not been so pleasant, having fallen, to lie still and gaze at the golden roof and hear the endless soothing noise of the water and breathe in the curiously delightful smell of the herbage...

In this paradisical landscape, the fusion of moral good and physical delight is a subtle thing, with some surprising aspects: 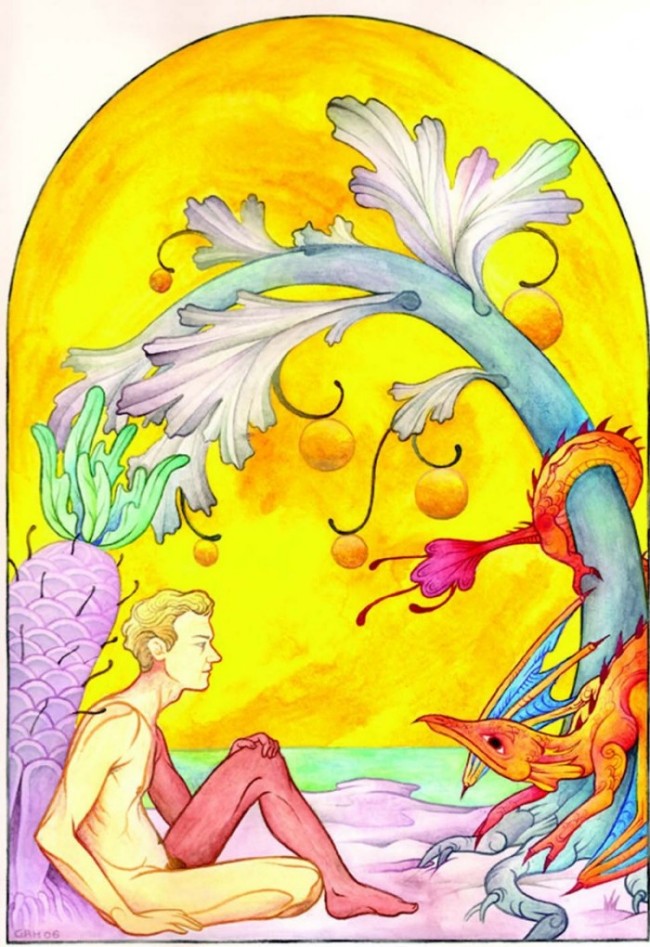 Now he had come to a part of the wood where great globes of yellow fruit hung from the trees - clustered as toy-balloons are clustered on the back of the balloon-man and about the same size...

He had meant to extract the smallest, experimental sip, but the first taste put his caution all to flight.  It was, of course, a taste, just as his thirst and hunger had been thirst and hunger.  But then it was so different from every other taste that it seemed mere pedantry to call it a taste at all.  It was like the discovery of a totally new genus of pleasures, something unheard of among men, out of all reckoning, beyond all covenant.  For one draught of this on Earth wars would be fought and nations betrayed...

As he let the empty gourd fall from his hand and was about to pluck a second one, it came into his head that he was now neither hungry nor thirsty.  And yet to repeat a pleasure so intense and almost so spiritual seemed an obvious thing to do.  His reason, or what we commonly take to be reason in our own world, was all in favour of tasting this miracle again; the child-like innocence of fruit, the labours he had undergone, the uncertainty of the future, all seemed to commend the action.  Yet something seemed opposed to this "reason".  It is difficult to suppose that this opposition came from desire, for what desire would turn from so much deliciousness?  But for whatever cause, it appeared to him better not to taste again.  Perhaps the experience had been so complete that repetition would be a vulgarity - like asking to hear the same symphony twice in a day. 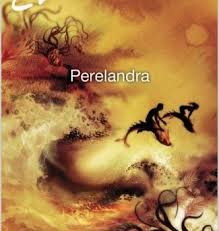 Restraint, in other words, is a part of pleasure because both come from appreciation, the awed, respectful appreciation of a numinous world.  The above passage is from the lonely time before Ransom has met the Lady, and before the arrival of the Tempter who threatens this second Eden.  Lewis has to meet what one might think would be an impossible challenge for a writer: that of making lone-man-plus-environment into a picture of bliss mingled with excitement.  How the heck do you put the Numinous into prose, without drama to help?

Well, the answer to that is, there is drama, the drama of unexpected impressions, of clashing thoughts, of hopes and fears - yes, fears, for Ransom does not yet know why he has been sent to this beautiful world.  (And if he had known, he would have feared more.)  As the invisible Sun sinks towards setting beyond the cloudy envelope of Venus:

...Looking over his shoulder he saw the whole island ablaze with blue, and across it and beyond it, even to the ends of the world, his own enormous shadow.  The sea, far calmer now than he had yet seen it, smoked towards heaven in huge dolomites and elephants of blue and purple vapour, and a light wind, full of sweetness, lifted the hair on his forehead.  The day was burning to death.  Each moment the waters grew more level; something not far removed from silence began to be felt.  He sat down cross-legged on the edge of the island, the desolate lord, it seemed, of this solemnity.  For the first time it crossed his mind that he might have been sent to an uninhabited world, and the terror added, as it were, a razor-edge to all that profusion of pleasure.

And yet I know of one critic who has suggested that one would get bored in Perelandra's "candyfloss paradise".  To which I reply, no boredom asphyxiates quite like the vacuous stupidity of certain critics.

For the portrayal of Perelandrian innocence, see the OSS Diary for 19th December 2016.

For the spaciousness and the "inscrutable character" of Perelandra, see the OSS Diary for 27th December 2016; plus the succeeding entry, More Perelandrian Insights, for links to the "faint breath" or hint of relevance to classical myth.

Ransom's fight with the Un-Man is ridiculously juxtaposed with a far lesser narrative in Unreasonable Demands and Absurd Comparisons.

For the places in the text which have puzzled me see Stumbling-points in Perelandra.

For an extra place-reference to be found in That Hideous Strength see A third land on Perelandra.