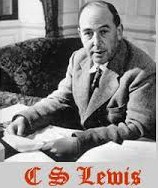 What can we do with C S Lewis?  The fellow is too big for our website.  Complete mastery of the English language, together with the true spirit of science fiction plus a keen intellect's creative religious instinct, are three traits not often found in the same person - to put it mildly.

Fortunately we don't have to do him all-round justice here, as we are focusing upon one topic - the Old Solar System.

Here, for a start, is our usual little gazeteer of world-references.

For the character of Mercury (Viritrilbia): chapter 15 of That Hideous Strength.

References in the Cosmic Trilogy passim to the isolation of our world; for example regarding the great war which the evil Intelligence of the primeval, as-yet lifeless Earth, waged upon the other planets, see the last few chapters of Out of the Silent Planet.

That Hideous Strength, the trilogy's third volume, is set wholly upon Earth.

For the Moon (Sulva):  That Hideous Strength, chapters 8 and 13, where we are told of the contrasting situation on the Moon's near and far sides.  Also the (unrelated) short story, Form of Things Unknown.

For Mars (Malacandra):  Out of the Silent Planet.

For the Asteroids - or rather, the sight of them from Mars, and the significance of them in Martian thought:  the last two pages of Out of the Silent Planet.

For the characters of Jupiter and Saturn (Glundandra and Lurga):  That Hideous Strength, chapter 15. 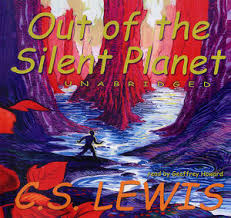 Lewis, in the words of his biographer A N Wilson, is "firing on all cylinders" in Out of the Silent Planet; the book is "unputdownable" -

Harlei:  But no more so than the other two in the Cosmic Trilogy.

Zendexor:  Precisely, and it's the devil of a job to find quotes that convey the general effect.  In fact, guess what, by and large I'm just not going to do it.  I refuse.  Except - 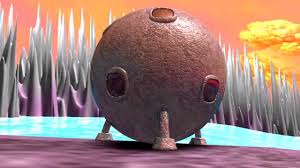 "You next," said Weston curtly.

Ransom took a deep breath and his hand went to the knife beneath his belt.  Then he got his head and shoulders through the manhole, his two hands on the soil of Malacandra.  The pink stuff was soft and faintly resilient, like india-rubber: clearly vegetation.  Instantly Ransom looked up.  He saw a pale blue sky - a fine winter morning sky it would have been on Earth - a great billowy cumular mass of rose-colour lower down which he took for a cloud, and then -

"Get out," said Weston from behind him. 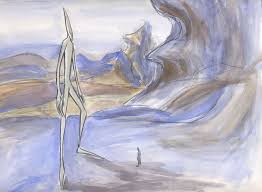 He scrambled through and rose to his feet.  The air was cold but not bitterly so, and it seemed a little rough at the back of his throat.  He gazed about him, and the very intensity of his desire to take in the new world at a glance defeated itself.  He saw nothing but colours - colours that refused to form themselves into things.  Moreover, he knew nothing yet well enough to see it: you cannot see things till you know roughly what they are.  His first impression was of a bright, pale world - a watercolour world out of a child's paint-box; a moment later he recognized the flat belt of light blue as a sheet of water, or of something like water, which came nearly to his feet.  They were on the shore of a lake or river.

There, I think I can just about get away with lifting that passage out of its context.

Stid:  It was smart of Lewis to have his hero brought to Mars by kidnappers.  It allows the author to indulge his zest for interplanetary adventure while, at the same time, keeping true to his disapproval of space travel.  For the pioneers are villains.  They're up to no good - which is to be expected, in Lewis' opinion; he regarded interplanetary distances as "God's quarantine regulations" to protect the universe from the depredations of Man.

Zendexor:  Now that you have uttered the word "God" I had better get in quick, to forestall any hint from you, or any suspicion in the mind of a user of this site, that Lewis' science-fictional impulse is in any way overlaid or weakened by his devotion to Christian orthodoxy.

The fact is, the spirit of the true science-fictioneer breathes through all his trilogy, in perfect amity with its religious meaning.  You may not think that it possible, but I can point out what, in my opinion, makes it possible.

Lewis appears to reserve supernatural attributes to God alone.  His universe is peopled with invisible spiritual beings, but these eldila - "angels", including the powerful "Intelligences" that rule the worlds - are in principle scientifically verifiable.

He touches on this subject in Ransom's conversation with Augray, a sorn - the most intellectual and scientific of the three intelligent races of Mars. 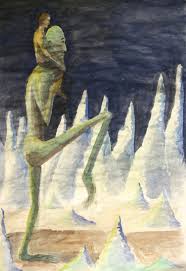 "Do you tell me, Small One, that there are no eldila in your world?"

"Not that I know of.  But what are eldila, and why can I not see them?  Have they no bodies?"

"Of course they have bodies.  There are a great many bodies you cannot see.  Every animal's eyes see some things but not others.  Do you not know of many kind of body in Thulcandra?"

Ransom tried to give the sorn some idea of the terrestrial terminology of solids, liquids and gases.  It listened with great attention.

"...We do not truly see light, we only see slower things lit by it, so that for us light is on the edge - the last thing we know before things become too swift for us.  But the body of an eldil is a movement swift as light; you may say its body is made of light, but not of that which is light for the eldil.  His 'light' is a swifter movement which for us is nothing at all; and what we call light is for him a thing like water, a visible thing, a thing he can touch and bathe in...  To us the eldil is a thin, half-real body that can go through walls and rocks; to himself he goes through them because he is solid and firm and they are like cloud..."

"Form of Things Unknown" in The Dark Tower and Other Stories (1983); see also the page on this site, Lurkers on the Moon, and the extract, Stone statues on the Moon.

For more on the eldila - in particular, the corrupted ones of our own world - see the page on religion in the Old Solar System.  See also Staining Space.

For the NICE's Head, see the page on hyper-brains.

For Lewis on nationality, see the page on America's Own Haunting.

For the ultimate Solar System language, see the OSS Diary for 20th July 2016.

For Lewis and the landscape of Mars, see the essay by our contributor Antolin, Out of the Silent Planet - Overview.  Also re the gradients on Mars see Verticality.

For Lewis' essay on imagination and thought in the Middle Ages, and its significance for sf, see the OSS Diary for 14th July 2016.

For An Experiment in Criticism see the OSS Diary, 14th September 2016.

See Innocence and the Planet of Love for how natural savagery and moral evil might or might not fit into the timing of the Fall.

For getting over fears of aliens see the Diary, Sudden Changes of Mood.

For the origin of our feelings about space and other worlds, see the Diary,
Cathexis in C S Lewis and Heinlein.

For Balki the pool, see CLUFFs.

For A Field Guide to Narnia and comparison with possible OSS guides, see
Narnian Analogue.

For the moral doubts about space travel see CSL and I: the last disagreement.