lurkers on the moon

The moon as the past or present abode of life has given us a few classic tales, notably The First Men in the Moon and The Moon Era.  Distinct from this theme, we have the dead or mostly-dead moon, which gives us the second type of classic scenario, as in Earthlight.  Those two sub-genres would appear, at first, to cover the possible options.  The first version of the moon is fertile; the second, though still full of character and interest, is barren.  What else could there be?  Surely it's a binary choice of focus.

This kind conjures an emphasis neither upon a natural ecology-bearing Moon nor upon an artificially made-liveable Moon, but, instead, upon a Moon which is memorable for being where something lurks.

Here's an early explorer, the fourth to attempt a lunar landing (his three predecessors having lost contact shortly after touchdown), getting his first (and last) view of a moonscape:

The surprising thing was how small it looked.  He thought he could account for this.  The lack of atmosphere forbade nearly all the effect that distance has on Earth.  The serrated boundary of the crater was, he knew, about twenty-five miles away.  It looked as if you could have touched it.  The peaks looked as if they were a few feet high.  The black sky, with its inconceivable multitude and ferocity of stars, was like a cap forced down upon the crater; the stars only just out of his reach.  The impression of a stage-set in a toy theatre, therefore of something arranged, therefore of something waiting for him, was at once disappointing and oppressive... 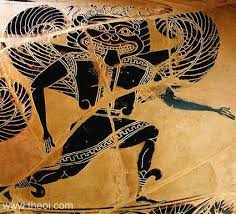 A good scene-set, this, for a tale in which a horror known only from ancient Greek myth is found to exist in reality.

Harlei:  You mean, the thing - I won't mention its name - is really a lunarian?

Zendexor:  It might be.  The answer to that depends upon whether it had retreated from Earth to Moon since classical times, or whether it originally came down from Moon to Earth and then returned.  The author does not say, and perhaps had not decided when he wrote the story.  Anyhow, it's clever the way he uses up-to-date astronomy and psychology to prepare the way for the ancient terror.

Stid:  It's good, but it's only a punch-line story.

Zendexor:  Not "only", but yes, it is a very short short.  So let's look at a slightly lengthier Lunar Lurk - 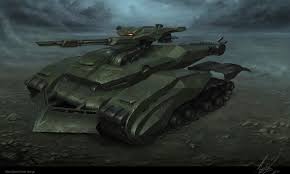 ...It knew the nature of itself.  It learned of itself by introspecting damage, and by internal scanning.  It alone was "being".  All else was of the outside.  It knew its functions, its skills, its limitations.  It listened to the land with its feet.  It scanned the surface with many eyes.  It tested the skies with a flickering probe.  In the ground, it felt the faint seisms and random noise.  On the surface, it saw the faint glint of starlight, the heat-loss from the cold terrain, and the reflected pulses from the tower.  In the sky, it saw only stars, and heard only the pulse-echo from the faint orb of Earth overhead.  It suffered the gnawings of ancient pain, and waited for the dawn...

Here you have an artificial lurker - a huge, lumbering, wounded war machine, a deadly malfunctioning robot that prowls the surface of the Moon.  The interesting thing about this story, to me, is that this monster is no less spooky for being a machine.

Stid:  I know what you mean about this story.  It does haunt the mind to a surprising degree, considering the villain is only a metal gizmo.  However, I suggest that's due to the setting.  Put it on Earth, and the monster would be a practical menace, no more.

Zendexor:  But of course - that's just the theme I'm exploring on this page: the effect of a lunar setting upon our emotions.  Now let's take a step deeper into the realm of nightmare, by shifting our attention from man-created to alien-created artificial hauntings.

In the novel Rogue Moon, a mysterious labyrinthine building on the lunar surface teases the Earth authorities by its very existence.  The Government feels it cannot afford not to investigate it.  But all who enter it die before they have traversed it.  So the Government sends in the same man more than once - or rather, transmits replicas of the same man, who thus is forced to die a multitude of deaths. 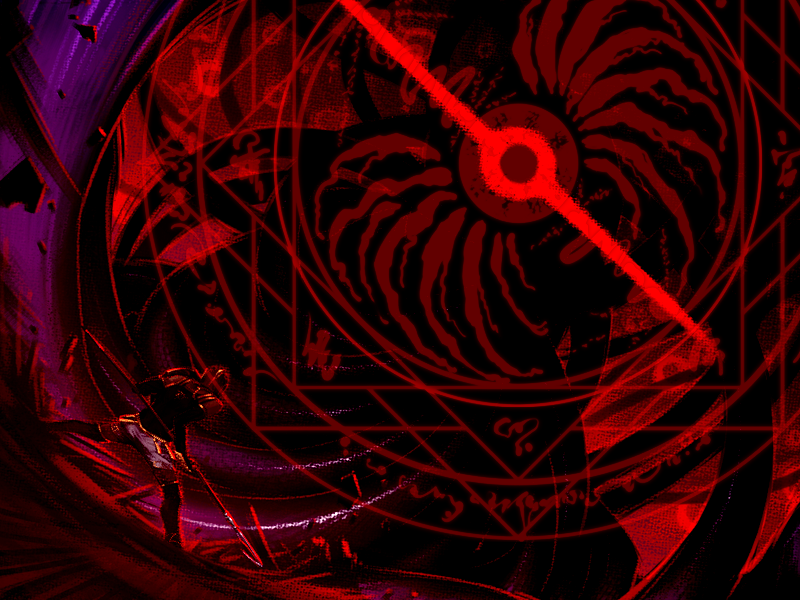 Hawks smiled again in the same way. "We tear a gateway where no gate has ever been," he said, nodding at the mechanisms, "in a wall we didn't build.  That's called scientific investigation.  Then we send men through the gate.  That's the human adventure.  And something on the other side - something that never bothered mankind; something that's never done us any harm before or troubled us with the knowledge that it was there - kills them.  In terrible ways we can't understand, it kills them.  So I keep sending in more men.  What's that called, Sam?"

Stid:  I'd call it criminal lunacy...

Zendexor:  Well, for a fact, the characters in that book aren't the most balanced of people.  I suppose the pressure has got to them - or maybe the project attracts a certain type...  Anyhow, the macabre obsessives doing their macabre job makes the book a memorable exercise in "noir" sf.

Harlei:  Not the sort of adventure story I like, then.

Stid:  No, I can't imagine you curling up with this one, Harlei.

Zendexor:  Rogue Moon is the sort of book which someone like me might re-read at roughly twenty-year intervals.  It's not fun, but it's powerful.  Perhaps that's what you expect from that particular author.

It's time for us to turn to an alien menace from the pen of an author of children's books who does provide lots of fun, while at the same time creating a memorable sense of menace to threaten the pioneers of Moon Base One. 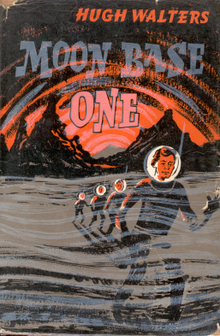 The alien presence on the Moon in Walters' books is something special.  Compared with this creation, his accounts of life on Mars and Venus, while vivid and interesting, don't have that extra sense of utter mystery.  It's made me think just today, for the first time (this is amazing, considering I've known these books for decades), that perhaps we are dealing here with native lunar intelligence.  Really, I never thought of that before; I had always assumed it was some sort of invader from the stars.  But that no longer rings true, now that I reflect upon it more seriously, in its own terms.  There's no sign of a star-travellers' ship or base anywhere in the books.  All we have is that presence on the Moon...

...For some reason he turned round and looked behind.  The cry that rose to his lips was strangled before he could utter it.  Only the choking noise he made sounded over the radio.  It was enough to attract the attention of the others.  As one they stopped and turned round too.  They saw what had alarmed their stolid companion.

Some hundred yards away was a solid wall of thick, grey mist.  It blotted out the way they had come, and was creeping steadily towards them...

Stid:  Mist on the airless Moon.  Either an absurdity, or a nightmare.

Zendexor:  It's referred to as "the physical manifestation of an Intelligence from somewhere unknown", but, as I said above, I now suspect it is from the Moon itself.  And the author is no longer alive to contradict me.  Anyhow, just imagine you're a teenage reader, in the 1960s, coming across this account of what might lurk on the Moon.

...The Mist was thicker than ever.  It seemed to be drawing itself together in an effort to stop their progress.  Knots of vapour, looking almost solid, would suddenly collect in front of them as if to bar their way...

For Keith Laumer's lurkers, in a lookalike moon around some extra-solar planet, see the comments in the OSS Diary for 18th January 2017 regarding A Plague of Demons

› Lurkers on the Moon