How can this book be so realistic and yet so magical?  How does Arthur C Clarke weave his literary spell?

Our answer to this will justify our inclusion of the novel here.

It will quiet those who object that such a realistic, modern, hard-science work is out of place in a website devoted to the Old Solar System.

Stid:  I fail to see the problem.  Earthlight was published way back in the year 1955.  It can't be all that up-to-date.

Zendexor:  Oh yes it can!  More or less.  Just a few marginal factual details would be changed if the novel were re-written now.

The lunar plant life, for instance, might not make it into a modern edition (though we can't be sure; astronauts have only visited six sites on the Moon).

And the technology includes some out-of-date stuff, especially the information recording and computing equipment using magnetic tape and paper tape; also, astronomers using photography rather than the charge-coupled devices of a more digital age.

But these are very minor points when you set them against Clarke's achievement in grasping and depicting the practicalities of life on a 22nd-century colonized Moon.  It's gloriously done: the Moon portrayed as a home, yet not losing any of its wonder.  An imaginative and a literary feat, the writing so good that it beguiles as it flows, so utterly readable that the art of it is concealed, making the achievement seem easy.

Stid:  Is this then the secret answer you've promised to give us, simply that Clarke is a very good writer?

Zendexor:  No, I realize that his skill as a writer isn't directly relevant to the issue of whether Earthlight belongs to the OSS.

That issue must be resolved by reference to subject-matter, not style or technique.  Nevertheless, style and technique lay the trail along which I shall work my way round to the answer.

Let's start with a look at two contrasting passages. 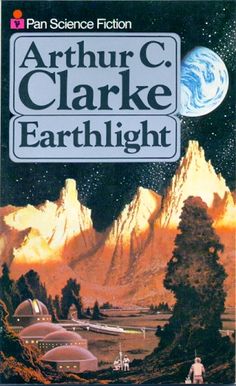 In the first, from chapter 1, the accountant-cum-spy Bertram Sadler is riding the monorail from Central City to his destination at Plato Observatory in the Mare Imbrium.  As the railcar speeds along, Sadler goggles at the view from the forward window.

...there was a cliff on the right which limited vision.  On the left - let's see, that would be south, wouldn't it? - the broken land fell away in a series of layers as though, a billion years ago, the lava welling up from the Moon's molten heart had solidified in successive, weakening waves.  It was a scene that chilled the soul, yet there were spots on Earth as bleak as this.  The Badlands of Arizona were equally as desolate; the upper slopes of Everest were far more hostile, for here at least was no eternal, ravening wind.

And then Sadler almost cried out aloud, for the cliff on the right came to a sudden end, as if a monstrous chisel had sliced it off the surface of the Moon.  It no longer barred his view; he could see clear round to the north.  The unpremeditated artistry of Nature had produced an effect so breathtaking that it was hard to believe it was merely an accident of time and place.

There, marching across the sky in flaming glory, were the peaks of the Apennines, incandescent in the last rays of the hidden sun...

Sadler has to wait till his eyes adapt; then he looks again.

The peaks floated in the sky, fantastic pyramids of flame.  They seemed to have no more connection with the ground than do the clouds that gather above a sunset on Earth.  The line of shadow was so sharp, the lower slopes of the mountains so lost in utter darkness, that only the burning summits had any real existence.  It would be hours yet before the last of those proud peaks fell back into the shadow of the Moon and surrendered to the night.

(That phrase "It would be hours yet before..." is an example of how Clarke takes every opportunity, by myriad scattered hints, to habituate the reader gradually to the slow, fortnight-long days and nights on the Moon.)

Now for the second example passage. 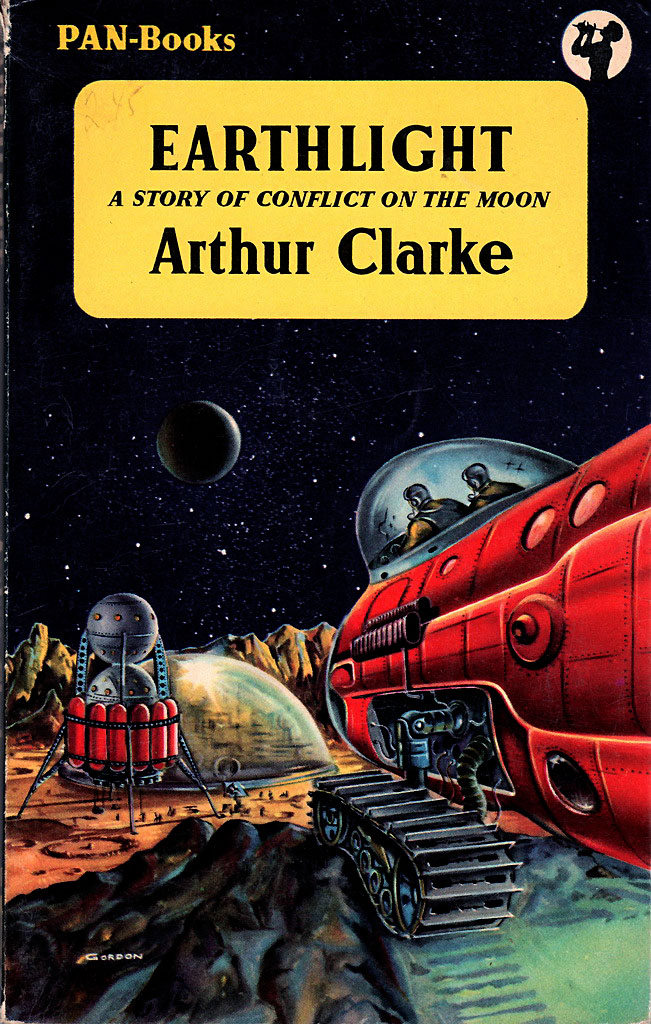 This time we're in a lunar "caterpillar tractor" crewed by two astronomers, Jamieson and Wheeler, who in their day off are driving out of the crater Plato to investigate what's going on in the Mare Imbrium - where something has been fogging the Observatory's photographic plates and disturbing its seismometers and magnetic readings:

The view was now rather disappointing, as it usually is when one descends to the lunar lowlands.  The horizon is so near - only two or three kilometers away - that it gives a sense of confinement and restraint.  It is almost as if the small circle of rock surrounding one is all that exists.  The illusion can be so strong that men have been known to drive more slowly than necessary, as if subconsciously afraid they may fall off the edge of that uncannily near horizon.

Note the artistry of this author, in such command of the see-saw balances of emotion, that he can afford to write "The view was now rather disappointing", this sort of grounding realism being a counterfoil to the exultation of "The peaks floated in the sky, fantastic pyramids of flame", yet in such a way that "disappointing" actually adds to our interest, especially as he passes from the sense of "confinement and restraint" of the close horizon, to its paradoxical corollary, the in-pressing immensity beyond, arousing the fear that one might fall off the horizon's edge...

In other words Clarke rouses our sense of wonder not by gushing but by effort to lay the groundwork, through observation and reflection, and creative comparisons which help ground the purple prose - as in the first example quoted, where after describing a lunar scene that "chilled the soul", he adds: "yet there were spots on Earth as bleak as this". 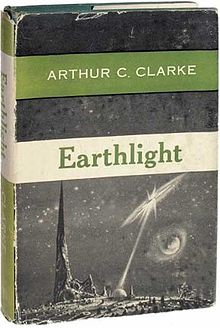 He doesn't rely on drama, though he provides plenty of that at the climax - a space-battle, no less.  The more constant excitement comes simply from the fact that he puts you there.  When you're reading it, you're on the Moon.  Not only a beautiful but a satisfying place.  Challenging, but without squalor.

Stid:  I think I can tell where this is going.

Zendexor:  Thank you.  As I was saying, Clarke excites our emotional taste-buds not by serving up some pungent mess of libidinous stew, but by offering us an array of vignettes, fascinating tid-bits arranged on a vast tray which extends in limitless perspective.

He gets us to focus outward, but comfortably, as we nibble one after another of what I'll call his little "thought-cakes".

I mentioned before the way he gets the reader gradually used to the long lunar day and night, through the reactions of the visiting spy, Sadler.

It would be instructive to subject Chapter One to a close textual analysis - it's a model of how an introductory chapter should be written.  Rather than crowd too much stuff into the picture, Clarke advances our understanding not only by showing us what can be seen but by telling us what can't (at the moment) be seen:

If it had been day, Sadler could have seen the prodigies of engineering that had flung this track across the foothills of the Apennines.  But the darkness veiled the gossamer bridges and the canyon-fringing curves: he saw only the approaching peaks, still magically afloat upon the sea of night that lapped around them.

And more prosaically, during Sadler's visit to Central City:

He'd just missed a tennis tournament in Dome Four, which should have been worth watching.  It was played, so someone had told him, with a ball of normal size and mass.  But the ball was honeycombed with holes, which increased its air resistance so much that ranges were no greater than on Earth.  Without some such subterfuge, a good drive would easily span one of the domes.  However, the trajectories followed by these doctored balls were most peculiar, and enough to induce a swift nervous breakdown in anyone who had learned to play under normal gravity.

You see how this particular little "cake" of a paragraph provides you with the following ingredients: an idea of the size of the domes; a reminder of the low lunar gravity; an example of how far human ingenuity can and cannot compensate for this change from the terrestrial norm; a glimpse of leisure facilities in Central City.

We have personal vignettes, too; scenes in which the personalities of Jamieson (cautious) and Wheeler (impulsive) act as foils for each other when mysteries and dangers loom; scenes in which the reserved Molton almost confides his dissident beliefs; scenes in which Sadler aches with concern for his wife back on Earth - whom his controllers have forced him to lie to, so as to keep secret his presence on the Moon.

The main characters in the book are: the spy Sadler; the astronomers Molton, Jamieson and Wheeler; Maclaurin, Director of the Plato Observatory; the physicist Carl Steffanson; and the Triplanet Federation space fleet commander, Commodore Brennan.

The only one of these for whom we are given physical descriptions are Molton (ugly) and Maclaurin (tiny).  The others - especially Sadler himself - we have no idea what they look like.  And guess what - it doesn't matter a hoot.

Stid:  You sound very "downright" there, Zendexor.  As if you might be pre-empting possible criticism.  Clarke has often been criticised for his lack of characterisation, the lack of human relationships in his stories.

Zendexor:  I know, and it's a lot of bunkum.  The characters in Earthlight fit the tale perfectly.  In fact they, and not the technology or the depiction of the Moon, are what justify my inclusion of this page in a survey of the Old Solar System -

Stid:  Hear that, Harlei?  Here we go!  I know Zendexor well enough by now.  I can predict exactly what line he'll take from here.

The poor guy is suffering from a generation gap.  He's going to say that real people with real dignity are more or less extinct nowadays in our bed-hopping slobocracy, and so a novel like Earthlight - populated as it is by human beings - virtually amounts to a Lost Race story.  And that - according to Zendexor the cultural dinosaur - is why the tale belongs to the Old Solar System.

Zendexor:  This dinosaur says thanks, Stid, for the compliment.

For the Battle of Pico see Decisive Battles of the Old Solar System.

For analysis of a surprising phrase see Sneaking down to Jupiter.