It's not a bad use of space if we devote an entire webpage to one little gem of a tale, if that tale provides us a vista of vast possibilities.

Stid:  You mean, I take it, that it shows what can be done but which hasn't yet been done, except in one short eighteen-page story.  A bit frustrating, I'd say, especially as Poul Anderson is no longer with us and therefore can't write any sequels.

Harlei:  I'd say Asimov's OSS detective tale The Talking Stone, discussed on the silicon life page, is worthy to be set beside The Martian Crown Jewels.  Zendexor isn't concerned about sequels, but about sub-genres.  What we want to publicize, and encourage, is... um...

Zendexor:  Takes a bit of definition, doesn't it?  But let's make the effort to pin down what makes Anderson's story special.

First point: it appeared in 1959; that's to say, at a time during the last few years before Mars was imaged by space-probes.  It was still just possible, in 1959, to believe scientifically in the existence of a native civilization on Mars.  Anderson certainly gives us an advanced one.

Second point: within that parameter, he's utterly realistic.  His Martians are not at all human.

Syaloch was a seven-foot biped of vaguely storklike appearance.  But the lean, crested, red-beaked head at the end of the sinuous neck was too large, the yellow eyes too deep; the white feathers were more like a penguin's than a flying bird's, save at the blue-plumed tail; instead of wings there were skinny red arms ending in four-fingered hands.  And the overall posture was too erect for a bird.

And the problem which this Martian Sherlock is asked to solve is rooted in realistic astronautics - the interplay of gravity and orbital dynamics which enabled criminals to steal the crown jewels of Mars (which had been on loan to the British Museum).  The solution is elegant -

Stid:  So elegant, it's likely to remain a one-off, in my opinion.  I don't see this kind of story being successfully repeated.

Zendexor:  But that's the thing about detective stories, the good ones anyway: they're each a kind of unrepeatable miracle.  I wouldn't worry about the field being played out.  If you're that kind of writer, you'll find a way to repeat the performance.  But let me go on to talk about the opposite aspect of The Martian Crown Jewels - not the closure of the case, but the open-endedness of the style.

For this, let me quote the passage where poor old Inspector Gregg, desperate to get help with a case which could "blow the Solar System apart", is making his way to the native sleuth's home.

Sabaeus is, of course, a purely human name for the old city nestled in the Martian tropics, at the juncture of the "canals" Phison and Euphrates.  Terrestrial mouths simply cannot form the syllables of High Chlannach, though rough approximations are possible.  Nor did humans ever build a town exclusively of towers broader at the top than the base, or inhabit one for twenty thousand years.  If they had, though, they would have encouraged an eager tourist influx; but Martians prefer more dignified ways of making a dollar, even if their parsimonious fame has long replaced that of Scotchmen.  The result is that though interplanetary trade is brisk and Phobos a treaty port, a human is still a rare sight in Sabaeus.

Hurrying down the avenues between the stone mushrooms, Gregg felt conspicuous.  He was glad the airsuit muffled him.  Not that the grave Martians stared; they varkled, which is worse.

The Street of Those Who Prepare Nourishment in Ovens is a quiet one, given over to handicrafters, philosophers, and residential apartments.  You won't see a courtship dance or a parade of the Lesser Halberdiers on it; nothing more exciting than a continuous four-day argument on the relativistic nature of the null class or an occasional gunfight.  The latter are due to the planet's most renowned private detective, who nests here. 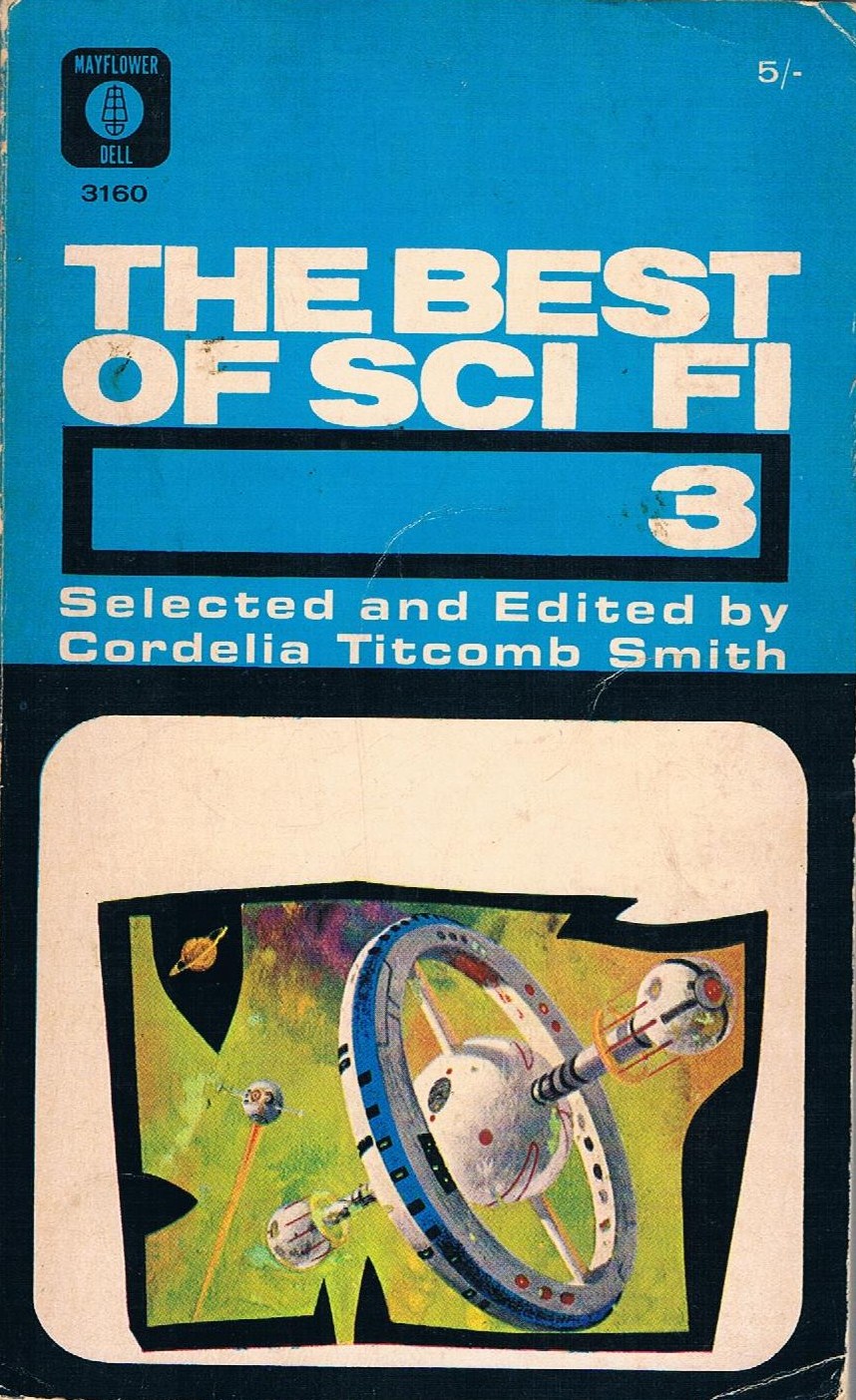 this is where my copy is

Now, look at the way these three paragraphs are packed with background suggestiveness.  There's an outright CLUFF, namely the word "varkled" - no explanation given, and the reader is invited to supply his own.  Used sparingly, CLUFFs are an asset, as this one is.  Then there are glimpses of architectural and cultural phenomena, with juxtapositions that hint at the fundamental differences which must exist between Martian and human psychology.

In my effort to convey the soul of this lavishly, generously written story, I'd like to say that it "twinkles" - in other words that full opportunity is taken to open little vistas at each turn of events and shift of scene.

You could try to count them, if you like.  For instance, when Gregg is entering Syaloch's apartment:

The Inspector felt a cautious way into the high, narrow room.  The glowsnakes which illuminated it after dark were coiled asleep on the stone floor, in a litter of papers, specimens, and weapons; rusty sand covered the sills of the Gothic windows.  Syaloch was not neat except in his own person.  In one corner was a small chemical laboratory.  The rest of the walls were taken up with shelves, the criminological literature of three planets - Martian books, Terrestrial micros, Venusian talking stones.  At one place, patriotically, the glyphs representing the reigning Nest-mother had been punched out with bullets.    An Earthling could not sit on the trapeze-like native furniture, but Syaloch had courteously provided chairs and tubs as well; his clientele was also triplanetary.

"I take it you are here on official but confidential business."  Syaloch got out a big-bowled pipe.  Martians have happily adopted tobacco, though in their atmosphere it must include potassium permanganate...

Harlei:  I think I counted twelve.  I take back my comparison with The Talking Stone, good though that story is.  That one has got blinkers on; this one, as you say, glitters or twinkles at every turn.

Zendexor:  And the flow is not interrupted.  When we're given a set of hints about the history of inter-planetary relations, it's not handed out in a separate wodge; instead it comes deftly in while we're being shown the anxious Gregg trying to gain reassurance that Syaloch will co-operate in solving the crime discreetly, to avoid political scandal. 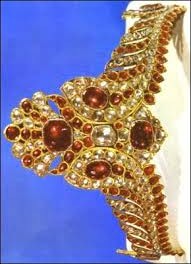 "...If you can solve this case, you can just about name your own fee."  The gleam in Syaloch's eyes made him regret that, but he stumbled on: "One thing, though.  Just how do you feel about us Earthlings?"

"I have no prejudices.  It is the brain that counts, not whether it is covered by feathers or hair or bony plates."

"K'teh.  The trade is on the whole beneficial.  Your fuel and machinery - and tobacco, yesss - for our kantz and snull.  Also, we were getting too... stale.  And of course space travel had added a whole new dimension to criminology.  Yes, I favour Earth."

"Then you'll help us?  And keep quiet about something which could provoke your planetary federation into kicking us off Phobos?"

The third eyelids closed, making the long-beaked face a mask.  "I give no promises yet, Gregg."

"Well... damn it, all right, I'll have to take a chance."  The policeman swallowed hard.  "You know about your crown jewels..."

We could definitely do with a few thousand more stories like this.  Pleasant, readable, expert tales that don't strike a single strained or false note.  This one ends with a nice sprinkling of CLUFFs: