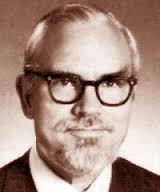 One single masterpiece earns Charles Harness his page on this site - one unputdownable novel whose villains pursue the hero from Earth to the surface of the Sun itself...

Stid:  We disagree on many things, Zendexor, but not on this.  The Paradox Men (first published in a shorter version as Flight into Yesterday) is a masterpiece, no doubt about it, and Harness' best book - though The Ring of Ritornel runs it close.  We can't talk about The Ring of Ritornel here - not even you at your most elastic could argue that that work could fit into the Old Solar System...  whereas The Paradox Men can fit.  Just.

Harlei:  It fits rather well, actually!  Are you hesitating because of the flight of the spaceship Toynbee Twenty-Two?

Stid:  Well, it does circumnavigate the cosmos, after all.  A bit beyond OSS guidelines...  to go all the way round the universe and come back five years before take-off!

Zendexor:  But we don't follow its flight except insofar as the astronomers at Lunar Station see it on their photographic plates - see it distort the shapes of galaxies as it plunges through them at transphotic velocities.

And the ship is not exploring in the ordinary sense.  Its mission is really aimed at the place it started from - Earth.  We understand this when we learn that the fantastic speed of the voyage does something to the crew, giving them powers which are then used to change Earth's history after its return -

Harlei:   And only just in time, too.  What with Chancellor Haze-Gaunt at the helm, America Imperial is about to launch Operation Finis.

Zendexor:  Indeed the slave-society of the West is heading for disaster.  While the flight of the Toynbee Twenty-Two provides a haunting kind of frame for the story, the punch is packed by what's inside the frame - the action of the story, set in America and on the Moon and Sun in the year 2177.

Harlei:  And what action!  What settings and what characters - wow...

Zendexor:  Yes, the phrase "larger than life" comes to mind - but lest that phrase subtract from "convincing", let me state that I have nothing but praise for the extravagance of Harness' achievement.  The book blazes hypnotically in the mind of the reader.  As for how the author did it...

I think that a few, a very few books have, instead of characters and backgrounds, a fusion of the two.  I suggest that in these books we experience, for example, Keiris-combing-her-hair-while-Haze-Gaunt-baits-her or Alar-on-the-floor-of-the-tipping-solarium or Thurmond-ripping-the-pages-of-the-mutants'-register as fused integrated blocks of vision.

Stid:  Pompous, Zendexor!  The way you announce your theory...  Any good yarn does the sort of thing you've just described.

Zendexor:  In that case I've described it wrong.  I've used the wrong words.  For the point I'm making is that there is something special about this book.  As far as I know only two other authors have produced works that can compare with it in the sense I'm trying to target: Alfred Bester in The Stars My Destination, and Barrington Bayley in The Fall of Chronopolis.

Stid:  Well, it's no use you trying to pin it down with your absurd theory.  I take it you're alleging that The Paradox Men is a string of discrete, atomised character-scene lumps.  Rubbish.  There's plenty of continuity of character.

Harlei:  Let me come to your rescue, Zendexor.  Stid, can't you see he's only trying to see where most of the power comes from - he's not really denying that there's also normal character-continuity from scene to scene.  It's just that some combinations of character and scene are particularly colourful...

Zendexor:  Colourful isn't the word.  Was any hero ever doomed so thoroughly as Alar the Thief as the deserted solarion sinks into the sunspot? 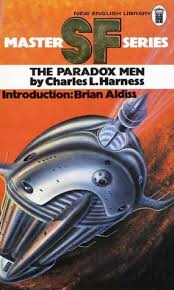 ...He spat out a mouthful of blood and calculated rapidly.  If the spot were 16,000 miles deep the temperature at the cone apex would be a little below 7,000.

If the station could float gently to rest there he might live for several hours before the heavy plant sank deeply enough to reach the intolerable temperature.  But its landing wouldn't be gentle.  The station was now falling under an acceleration of twenty-seven gravities, and would probably strike the bottom of the cone at a velocity of several miles a second despite the viscosity of the spot gases.  Everything about him would instantly disintegrate.

He was aware of the chair cushions pushing against his back.  The metal tubing along the arms seemed considerably warmer now to his touch...

Stid:  Considered as a whole, the episode on the solarion is indeed an awesome piece of scene-setting...  the more so because of the juncture of dramatic physical backdrop with dramatic personal enounters - two of Alar's most powerful enemies, the police chief Thurmond and the sadistic psychologist Shey, have followed him to the Sun.

And yet, Zendexor, if all you can say is that Harness is good at matching dramatic encounters with dramatic backgrounds, I don't think you've gone very far towards showing why or how The Paradox Men is to be regarded as something unusual - something which other good writers of action-adventures fail to achieve.

Zendexor:  That's because, overcome with enthusiasm, I plunged rashly into the argument, without sufficient reflection; but now that my first gushing effusion has been checked by your superior sagacity, I shall have another go, more prudently this time.

You may have heard of the Golden Ratio, in architecture.  1 to 1.618 (to three decimal places).  A number which describes what, in practice, turns out to be a peculiarly satisfying visual proportion... 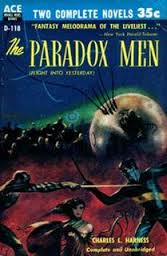 I suggest that in literature there is a certain optimum proportion and degree of colourful action / background / character  in a certain sub-genre of sf, and that this particular combination could (if such things could be quantified) be shown to produce an effect which appears to perfection, in the very few tales in which the aforesaid proportion reigns.

I don't mean that these few books are better than other kinds of book; only that they are bound to be rare classics of their kind.  They run a peculiar risk and escape from it by that perfect proportion.

Stid:  What 'peculiar risk' are you talking about?

Zendexor:  Haven't you ever wondered why so many thrillers are so boring?  If you put too much action, verve and scene-chopping variety into a book, you're in danger of wearing and confusing the reader rather than entertaining him.  On the other hand if you don't put in enough, the story drags.  Either way, you fail.  Only if you get if perfectly right - if you attain the equivalent of the precise Golden Ratio - can the thing come into successful hypnotic focus.  Then you weave your spell successfully.

Most great books are great for reasons which are nothing to do with all this.  Most great books ease you into a background and ground you and then show you the wonders which lurk around.  For instance Tolkien puts you in the Shire and then takes you step by step to Mordor; C S Lewis takes you at not too fast a pace to Malacandra and Perelandra and convinces you of their reality and only then, when you've found your bearings, does he lead you into further adventure.  And these authors either stick to single viewpoints or make the book long enough to accommodate multiple viewpoints without too rapid scene-chopping.  (That Hideous Strength is much longer than the two volumes which precede it.)

But The Paradox Men is flash bang helter-skelter bewilderment - and yet it works.  The author must have got his ratios right on that invisible target that spells success.  One hair's breadth to either side and he'd have failed.