the reefs of space - by Frederick Pohl
and Jack Williamson

This fine novel depicts a unique environment within trans-Plutonian space.  The "reefs" accumulate over aeons, by the continuous creation of matter in accordance with Hoyle's Steady State Theory - and creatures have evolved to inhabit them.

Stid:  Hoyle's theory is largely discounted nowadays; is that why you class the tale as "Old Solar System"?

Zendexor:  Not really.  Cosmological speculations come and go.  They are a separate issue from Solar System discoveries.  But in any case the publication date of The Reefs of Space is 1963, early enough to count as OSS, and besides, the planets aren't an issue in the plot.  So there's nothing to stop me from bagging this priceless coverage of the OSS' outermost realm, as subject-matter for a page on my site... 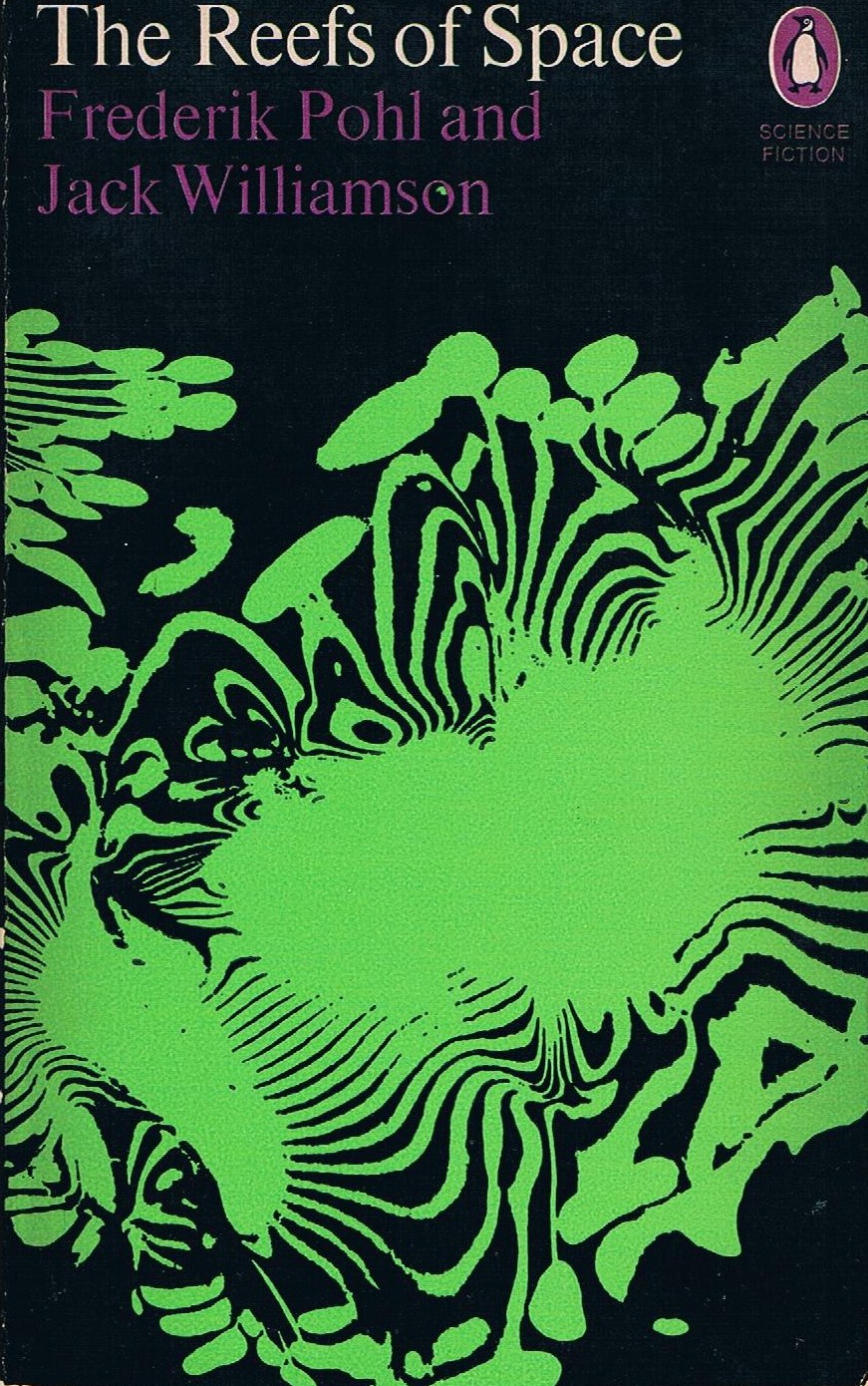 I don't know of any close parallel in other sf literature.  No other story, as far as I am aware, has portrayed a "space-reef" environment which produces a basic kind of life - the "fusorians" - that can fuse hydrogen into heavier elements and so yield the energy and the material to support an ecology of higher space-creatures.

The most advanced of the reefs' inhabitants - the streamlined "spacelings" - have evolved a reactionless drive and the ability to hold air around them as they dart around like living spaceships.

A man is able to ride with a spaceling, as it propels him within an air-globe towards (the man hopes) a reef.

...What made it hardest was that there was neither bow nor stern to their tiny world, no sure way of knowing which way they were going.  He could find nothing.  The stars shone splendid and unobscured, as he hung at nearly the edge of their air capsule - red stars, blue-white giants, clouds of nebular matter...

Then he saw the Reef ahead...

It appeared first as a pale point of light that suddenly grew into a bulging, uneven sphere of splendour.  It was a jewelled ball, floating in space, and the jewels were forests of crystal.

They came closer, like a comet, then slower.  Ryeland saw spiked trees of crystal carbon - diamond! - glittering with their own inner light.  There was [sic] strange bulging brain-shaped masses of blue and violet, patches of ghostly white sand, a frozen forest with bright metal leaves...

Stid:  It's a powerful idea, but literature is strewn with ideas which aren't properly exploited.  You need to show that the tale lives up to the promise of its premise.

Zendexor:  The prom. of its prem.?  Listen, then.  It is fulfilled by means of contrast.  Sharp, dramatic contrast.  On the one hand, the beauty and freedom of the Reefs; on the other, the horrific, totalitarian Plan of Man. 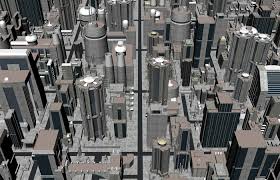 The Plan is a regimentation so soulless that it fits ideally with the monochrome prose style of most of the scenes set on Earth.  With one exception, those scenes - strung together by means of hardly noticeable transitions - are without any sense of locality or special atmosphere, as though the entire world has become a series of offices and corridors in which the population moves and works on the orders of the Plan.

Harlei:  And yet don't you think this "lack of atmosphere" is itself an atmosphere, somehow?

Zendexor:  I was getting round to that - yes, it's a point that needs to be made.  For there is nothing depressing about the experience of reading this book.  It is an unputdownable, riveting read.  The question is why, or how.  Here are some answers.

First, the hero, Ryeland, though a thoroughly decent fellow, is not against the Plan - despite its horror and despite the fact that he is a victim of miscarriage of justice even in the Plan's own strict terms.  This is an essential point.  The novel would have been a failure but for this.  If Ryeland had always been grumbling about the Plan and plotting against it, we would have known about the system only through his opposition; as it is, we experience it from inside, much more powerfully.  Even - dare I say it - we find within it a shivery justification....  which the naïf Ryeland has to accept, just as he has to put up with wearing a metal collar packed with explosive.

"You're a Risk!" rasped the Planner.  "You should not have dared defy the Plan.  That was an act of stupidity!

Ryeland took a deep breath.  Perhaps this was his chance to get his case on the record.  He began:  "Sir, let me explain.  I had no intention of defying the Plan.  There was a girl who reported me, and the Machine reclassified me as a Risk.  I think this was an error, but - " 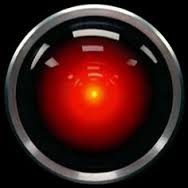 "You question the Machine?"

"Never mind!" snapped the Planner.  "I don't want you to incriminate yourself further.  You are your father's son, and you must remember that everything you do is suspect for that reason."

It took Ryeland's breath away.  For a moment he couldn't speak.  He stood there, weaving slightly...

Then he burst out:  "Sir, do I understand you?  You're saying that the Machine considers me a Risk because of what my father may have done before I was born!  That's not fair.  That's - "

"Fair!" bellowed the Planner...  "What sort of word is that, Ryeland?  'Fairness.' 'Freedom.'  'Democracy.'  All those words your father used to use, they run in the blood.  And they mean nothing.  What does 'fairness' have to do with seventeen hundred and fifty calories a day?

"Fairness," he sneered, "is used up, gone, spent!  Do you know what your blessed ancestors did, boy?  They mined 'fairness' and 'democracy' from the untapped resources of the world.  They didn't invent them, they mined them - just as the old farmers mined minerals from their cornfields, twenty crops of corn and a foot of soil!  Well, the topsoil's gone now.  And so is fairness and freedom.  The world is a closed system now boy, and there isn't enough to go round!"

So we have the two poles of the story: the regimented Earth, and the beckoning freedom of the Reefs, starkly opposed the one to the other.  Yet some provision has been made in the Plan of Man, to switch over to a new era of freedom, if the secret of the reactionless drive can be obtained from the strange life of the Reefs.  The Plan forms an "attack team" to address the problem.  The sinister General Fleemer is a somewhat unfortunate choice to head the team. 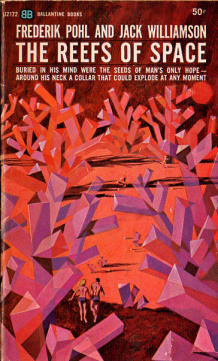 "...When the Plan of Man requires a new scientific discovery, a team is created to make it.  Such a team is needed now - and you are my Team, all of you!"

There was prolonged cheering.

Then Fleemer paused.  He smiled, and it was a scorpion's smile, vastly out of character in that wattled marshmallow face.

He said:  "I'm sure you all understand why you can be counted on to do your best."  He nodded merrily to Ryeland and the other iron-collar men.  "When you succeed, you will learn that Teamwork operates both ways.  When you succeed.  But if you fail - if you fail - why, then..."

He trailed off, and looked sombrely at the men for a second.

Then he grinned and drew one pudgy finger across his non-existent neck.  "Zzzzt!  The Body Bank!  But we won't fail!"

There was a burst of laughter...

If you fail to contribute successfully in a manner appropriate to your role in the Plan, you are consigned to the beautiful estate called Heaven on the island of Cuba, where you must contribute in a different sense: at unpredictable intervals your limbs and organs are forcibly donated to the Body Bank.  "Heaven" is the one Earthly scene in the book which has some local atmosphere...  a scene of drugged contentment where you are diminished piece by piece towards your gruesome end.

I trust you see what I mean about the contrast which fuels this book.

Stid:  Since your verdict seems entirely favourable, Zendexor, it appears I must make any negative points myself.  So let me point out that the story relies on excessive coincidence.  For example, Ryeland's survival depends on support from the Planner's daughter, the headstrong but staunch Donna Creary.  But he only meets her when he blunders accidentally into her quarters...  I ask you, how likely is that?

Harlei:  I reckon she may have had her eye on him anyway -

Zendexor:  Quite.  I seem to remember that she knew of his record...

Stid:  All right, but how does the fugitive spaceship locate the right Reef anyway?  Or can spacelings fly so fast that they can cover virtually any distance in the time it takes to fix upon their chosen destination? 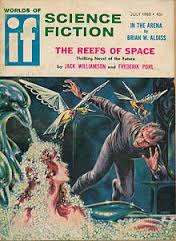 Ryeland surprising Donna in her bath

Zendexor:  To be honest, I'm not sure.  I'd have to read it carefully all over again and besides, what's the need?  We know that a good book which relies for its oomph on mythic power can enlist the reader's co-operation to smooth over any inconsistencies or gaps in the explanations.

So, that's my stance on it.  Entirely positive.

One further important point to justify this verdict:

The book is written with fine, calm clarity, almost one might say serenity, so that we glide through the horrific bits without depression.  They evoke awe and pity but they do not oppress the spirit, because the story is conveying us towards freedom - we can feel its breeze already in our faces.  That is partly because we sense the resilience of Ryeland, and the resourcefulness of Donna Creary - we are sure that one way or another our hero will evade the Body Bank.  But also the beckoning Reefs of Space shine their lamp of hope...

› The Reefs of Space