This lone masterpiece is in a genre of one - it is the only novel ever written which explores a realistic, alien, flourishing lunar civilization. 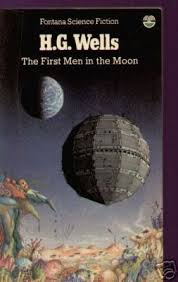 Harlei:  Except Burroughs' The Moon Maid -

Zendexor:  I did say realistic and flourishing.  The Mood Maid is great entertainment, sure.  But in the way of all ERB's works it is a triumph of dream rather than of speculation.  Moreover, its lunar culture is in serious decline, whereas Wells does not flinch from the greater challenge of describing success.  His Selenites thrive on their own terms.

Stid:  Like his Martians do when they keep to Mars and don't expose themselves to Earth bugs.

Zendexor:  You're forgetting that they must have been feeling the pinch on their own world, else they would not have bothered to invade Earth.  The Selenites, on the other hand, are doing fine where they are.  I'm stressing this point, before going on to explore the novel's virtues as a novel, because so much of sf literature chooses to aim for the picturesque temptations of "declinism", as I call it - the easy splash of autumnal colour to add poignancy and interest to a tale.  Fair enough - but Wells chooses the glory of the harder path, and he brilliantly succeeds, giving us a Moon civilization evidently at its zenith. 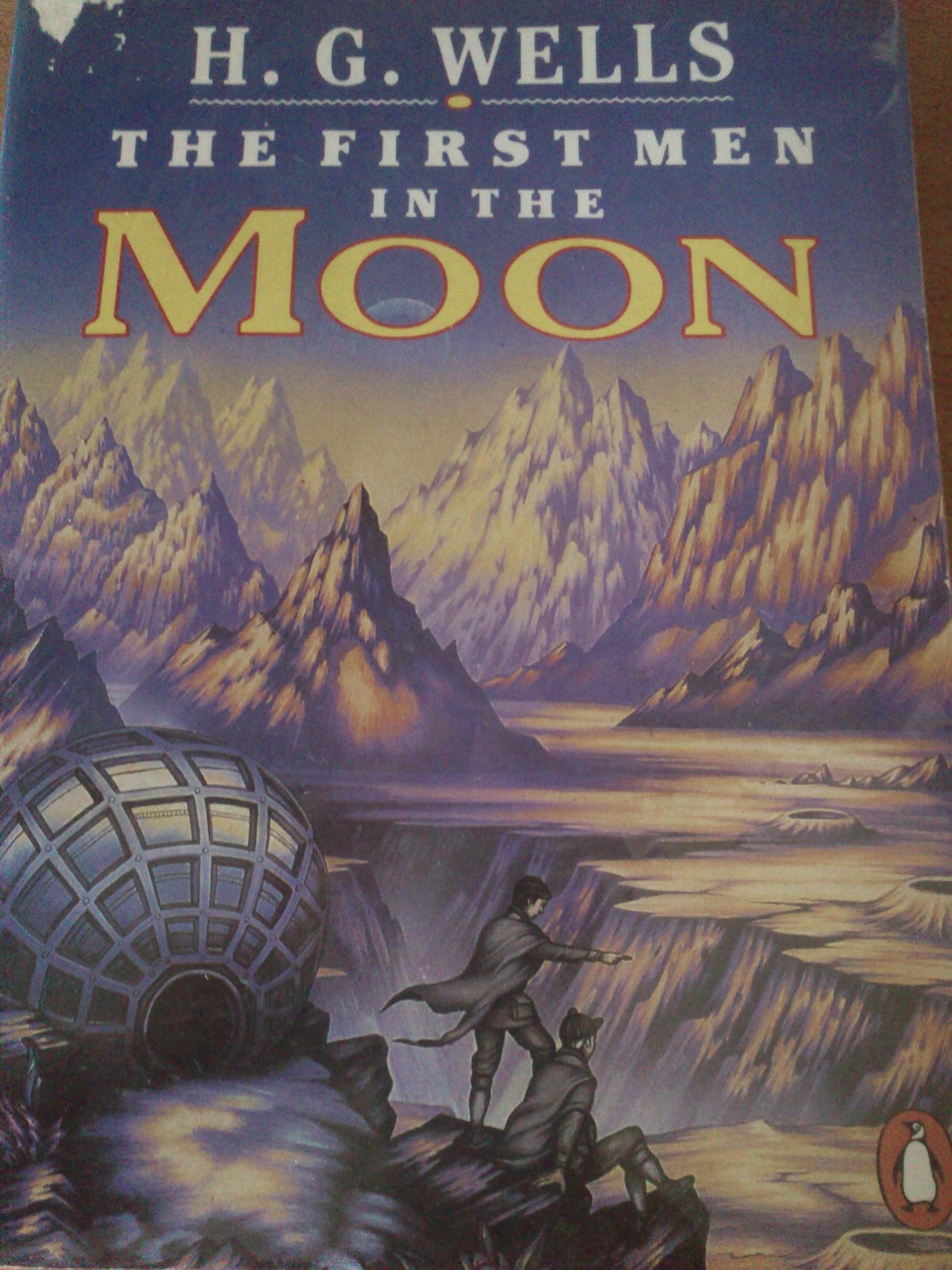 Stid:  Are you hinting, then, that you prefer The First Men in the Moon to The War of the Worlds?

Zendexor:  No, but I'm inclined to point out that The First Men in the Moon shines in more solitary splendour.  Both novels were ground-breaking when they came out, but The War of the Worlds had many successors in the annals of alien invasion; by contrast, nobody, in all the subsequent literary Moon voyages, ever followed the particular trail blazed by Bedford's and Cavor's adventure.

Harlei:  In any case, you're not comparing like with like.  The War of the Worlds is a public story; as a tale of invasion is bound to be.  The other book is a private tale of two lone pioneers.

Zendexor:  I was about to make that point myself, because it leads to another important contrast, and here please note an aspect wherein the Moon novel is superior: the narrator of The War of the Worlds is just a viewpoint; Bedford and Cavor, on the other hand, are proper characters, vividly drawn, and their strengths and weaknesses have a decisive effect upon the fate of their expedition. 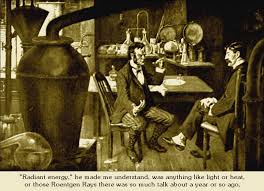 ...It was a strenuous time, with little chance of thinking.  But one day, when we were drawing near the end, an odd mood came over me...  Everything seemed dull and incredible.

"The moon," I reflected.  "But what do you expect?  I thought the moon was a dead world."

He shrugged his shoulders.

...I had some bad times before my business collapse, but the very worst of those was sweet slumber compared to this...  I was suddenly in the most enormous funk at the thing we were going to do...

This is Bedford the practical man thinking it over;  Bedford the parasitical schemer, who only wants to make money and is not interested in exploration or knowledge for their own sakes; Bedford the "cad" as C S Lewis calls him.  Then comes one of Wells' most deft touches.  Bedford, suddenly determined that he's not going to the moon, that he'll have nothing to do with Cavour's mad scheme, goes on a long walk instead.  He meets and chats with many ordinary people...

...After I had supped I sat on a bench by the door of the inn and gossiped with two labourers about brickmaking, and motor cars, and the cricket of last year.  And in the sky a faint new crescent, blue and vague as a distant Alp, sank westward over the sun. 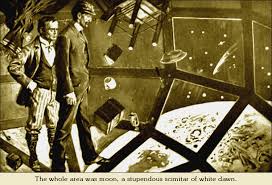 It seems there's more in him, after all.  Wells also narrates in masterly fashion how Bedford the materialist, during the voyage to the Moon, copes with the awe stirred in him; how his thoughts flit fantastically, how his average nature is discomposed...  and this is all done without "purple patches".  It's the most brilliant character-study, and achieved in a first-person narrative which must have made it all the harder to write, because the author has to make his narrator give himself away.  I take my hat off to H G Wells.

While I'm about it, let me go on in this vein, of showing how great Wells is as a plot-problem-solver.  He makes it look easy, and it does seem obvious in retrospect - how to get knowledge back from so deep in the Moon.  With a lone adventurer, it would be impossible; the fellow would never get back and so we'd never learn what he found out.  Wells therefore splits the viewpoint into that of the two protagonists...

Harlei:  He does that in The War of the Worlds too, remember - some of the tale consists of the reported experiences of the narrator's brother...

Zendexor:  All right, all right, but in The First Men in the Moon it's not a mere device, it is integrally linked to the characters of the two voyagers.  We are shown, in other words, how their different fates spring from their different natures, though I won't be more specific about the exact way it works out, lest I spoil the plot for those few OSS fans who may not have read the book and who, therefore, are still awaiting the treat of their lives.

I will say this much: that although much of Wells' lunar ecology is located underground, not all of it is.  This is important to me, as I long for stories of a properly living Moon, by which I mean, alive on its actual surface.

...I take it the reader has seen pictures or photographs of the moon, so that I need not describe the broader features, those spacious ringlike ranges vaster than any terrestrial mountains, their summits shining in the day, their shadows harsh and deep, the gray disordered plains, the ridges, hills, and craterlets, all passing at last from a blazing illumination into a common mystery of black.  Athwart this world we were flying scarcely a hundred miles above its crests and pinnacles.  And...

[Here we come to it, the specially great idea that the Moon close up is different.  If only other writers had also hit upon this theme!] 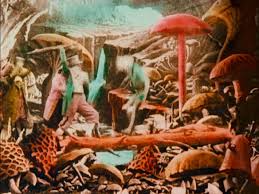 ...And now we could see, what no eye on earth will ever see, that under the blaze of day the harsh outlines of the ricks and ravines of the plains and crater floor grew gray and indistinct under a thickening haze, that the white of their lit surfaces broke into lumps and patches, and broke again and shrank and vanished, and that here and there strange tints of brown and olive grew and spread.

The explorers land just inside the zone of night, with the slow lunar dawn approaching the congealed "mounds and masses of frozen air" that lie awaiting the touch of the sun.

...The distant cliff seemed to shift and quiver, and at the touch of the dawn a reek of the gray vapour poured upward from the crater floor, whirls and puffs and drifting wraiths of gray, thicker and broader and denser, until at last the whole westward plain was steaming like a wet handkerchief held before the fire...

Stid:  You're rightly fascinated at Wells' selenography, his rendering of a world that transforms its surface between its fortnights of light and fortnights of dark.  And so later on we get the unforgettable episode in which Bedford is terrified of being "shut out" after his escape from the caverns, as night falls and he cannot find his spacecraft.  But are you going to get round to discussing the Selenites at all?  I know you're most fond of scene-setting, but...

Zendexor:  But, I don't like spoiling people's surprises.  I will say this: just as the human characters in this book are superior in individuality to the narrator of The War of the Worlds, so also we get to know the alien race of Selenites far more than we get to know Wells' invading Martians.  Granted, the Martians are terrific as foes.  Also, their natures are as well-drawn as they need to be for purposes of the plot.  But when all's said and done, they are depicted rather as object-lessons in cephalic and metabolic evolution than as members of a real culture. 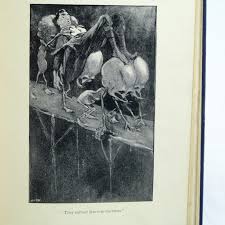 The Selenites, on the other hand, are shown to us on their own ground, in enthralling detail.  Roughly human-sized bipedal insectoids, they exhibit more variety, mental and physical, than most intelligent races in sf literature.  A final touch of realism, in one of the radio messages from the captive Cavor, is that in the midst of the satisfaction of his scientific curiosity he finds at one point his own mood darkening:

"...A company of attendants, bearing and dragging banners and masses of scented fungus and curious symbols, vanished in the darkness behind.  The way was lined by ushers and officers in caparisons that gleamed like steel, and beyond their line, so far as my eyes could pierce the gloom, the heads of that enormous crowd extended.

"I will own that I am still by no means indurated to the peculiar effect of the Selenite appearance, and to find myself, as it were, adrift on this broad sea of excited entomology was by no means agreeable.  Just for a space I had something very like what I should imagine people mean when they speak of the 'horrors.'  It had come to me before in these lunar caverns, when on occasion I have found myself weaponless and with an undefended back, amidst a crowd of these Selenites, but never quite so vividly.  It is, of course, as absolutely irrational a feeling as one could well have, and I hope gradually to subdue it.  But just for a moment, as I swept forward into the welter of that vast crowd, it was only by gripping my litter tightly and summoning all my will-power that I succeeded in avoiding an outcry..."

It's time to call a halt; I may already have said too much about this enthralling classic.  If you haven't read it, the good news is you'll be able to find a copy because it will surely go on being reprinted every so often untill the end of civilization as we know it.  This is definitely the big stuff.

For thoughts on "cavorite" and why it is maybe fortunate that it wasn't invented "for real" - see the OSS Diary for 3rd April 2017.

For an excerpt see Gold on the Moon - and lassitude.

For an appreciation of the "bogglement" issue see Perturbable Protagonists Required, in which I discuss Wells' achievement in the portrayal of Mr. Bedford.

› The First Men in the Moon