Io, Europa, Ganymede and Callisto each deserve a page of their own on this site.

Consider their surface areas - in millions of square miles:

Elbow-room for individual epics there; you could tuck a lot of saga into spreads of that size.  But before exploring these worlds individually we need to comment on them as a group.  This is because, collectively, they present us with an intriguing and puzzling aspect of the Old Solar System. 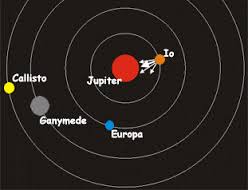 During the Golden Age of science fiction, hardly anything was known about the Galilean Satellites apart from their approximate sizes, their orbital periods and their distances from Jupiter.

Stid:  And that's the problem, isn't it, Zendexor?  Authors had a blank slate to write whatever they wished, uncontradicted by any known facts - and you can bet they availed themselves of the opportunity.  How, then, are you going to compose pages about the fictional characters of these four worlds?  That's your usual aim, isn't it - to sketch a world's personality.  But in this case, what unifying principle can there be?  To give Io, Europa, Ganymede and Callisto any sort of consistent individuality, any recognizable personality on a par with those of Mars or Venus, for example - it seems to me that you've got your work cut out!

Zendexor:  I do have my work cut out, yes, but not in the way you think.

I'm actually not going to have any trouble exploring the OSS personalities of the Galilean satellites.  That problem is going to solve itself...

I'll need help from metaphor or analogy.  The ones that spring to mind at this moment are "catalyst", "tinder-box", "powder-keg"... no, crystallization: that's it.  That's the word I want.

Harlei:  Well put, Zendexor: I see what you mean - the characters of the worlds crystallize out of the stories.

Stid:  What, even when the stories contradict each other?

Zendexor:  Yes, because there's always a bigger idea ("idea" in the Platonic sense) lurking beyond the contradicting stories, an inclusive idea big enough to embrace them all.  We explored this on our Venus page: the "Venus" idea is somehow great enough to tuck in the desert Venus, the fecund Venus, the ocean Venus... all of them equally Venus.

Stid:  But there you had some help.  That's to say, help from the ancient mythic or astrological underpinning of all our ideas of Venus.  They all connect in one important respect with the physical reality of the so-called Planet of Love, because all the contradictory Venuses do have in common the fact that they must be warm, since Venus is so much closer to the Sun.  So the various ideas cocoon themselves into that warm embrace...

Zendexor:  An ingenious argument, Stid, and I can tell where you're heading: you intend now to make the point, that no such astrologic-mythic advantage pertains to the Galilean Satellites, because their existence was not known before the seventeenth century.

Stid:  Precisely.  They missed the mythic bus.  Science-fiction writers had to start from scratch as far as those worlds were concerned, without support from any lurking myth.  Any character given to the Galilean Satellites can't be drawn from that well.

Harlei:  Can't this, can't that; you're a can'ty thinker, Stid.  Who are you, who is anyone to say what can't or can spill out from the well of myth?  Maybe Jupiter guards an ancient supply of it, Jove's power spilling and refracting into new colours as it interacts with its satellites... 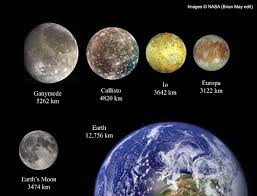 Zendexor:  I have to agree with Harlei here.  Myth isn't something manufactured only in ancient times.  More of it is being created as we speak, continuously, like matter pings into existence continually in Fred Hoyle's Steady State theory of the cosmos.

If you doubt that, just think about the Laboratory of Modern Myth, otherwise known as the United States of America.  A whole genre of myth was forged in a mere quarter century between 1865 and 1890, namely the Wild West.

Stid:  This discussion appears to be straying rather far from the Galilean Satellites.

Zendexor:  Straying is the name of the game.  The sf imagination is on a long leash.  We're discussing mental agility here, and that's what enables the mind to grab links in all sorts of directions, enough to create a character for the Jovian worlds out of all the disparate tales that have been written about them.

For example on the Ganymede page I shall be looking at accounts of that moon by Leigh Brackett, Robert Heinlein, Doc Smith, James Blish and Raymond Z Gallun.  They're all different, but -

.....After the kingfisher's wing
Has answered light to light, and is silent, the light is still
At the still point of the turning world.

Stid:  What was all that about?

Zendexor:  The mental agility point.  Without the fast snatch, the leap from light to light, it would be impossible to get anything from poetry like that, the unity-in-multiplicity it presumes "at the still point of the turning world" would not exist, and the sock it delivers to the jaw would not happen.  Since T S Eliot does deliver that sock to the jaw, we must admit what allows it to happen.  The tissue of myth - mythoplasm - allows it to happen.

This site includes separate pages for each of the four big Jovian moons, but, you may ask, what about stories which give coverage to more than one of them?

The answer to that is, it's actually hard to find any such "pan-Galilean" stories.  And I have never found the sort of epic I'd like, set amid the four moons, exploring the relations between them and their variety and shared history.  So far, then, we have to make do with fragments.

Here's one such, from Tepondicon:

...I knew how the seven cities of the High Ganymedean Plateau were first raided by Conway and his Earth Brigade after enjoying several thousand years' culture on this, the third satellite of Jupiter...

...both Io and Callisto had been conquered by the people of Ganymede and had been forced to pay a huge indemnity...

Unsatisfying, to read a tale which throws off fascinating little cluffs and doesn't follow them up.  Most of the story is concerned with a moral tension in the narrator, in whom greed battles with honour.  Fair enough, but I'd also have liked to see more... maybe get treated to a view of what things were like in the Jovian system before the Ganymedean conquest of Io and Callisto.  At what point in the "several thousand years" did it happen?  And why was Europa spared?  Really we could do with some more solid fictions.