what to see on
saturn 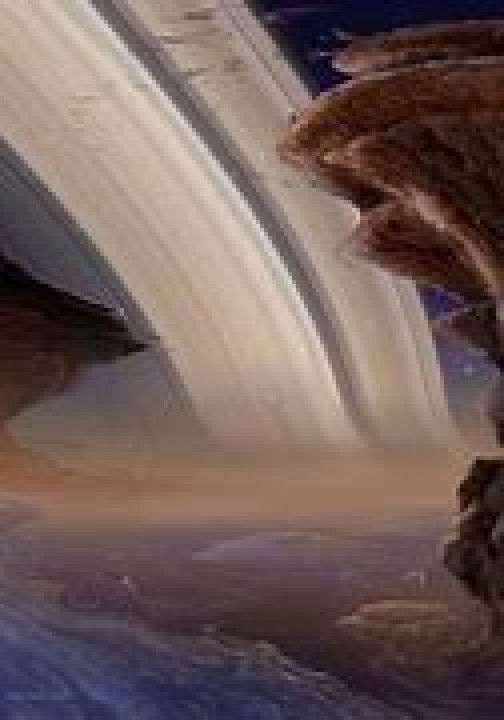 We stepped down onto the island ground, wet and squishy with tiny writhing vermipods.

The goggles were hard to get used to, the freeze-framed images constantly appearing with every lightning flash, lingering and then fading into gaudy shapes of the superimposed temperature patterns. Around us, even protected from the main wind, secondary currents sent sheets of water droplets across the roots, mud, and our suits. In the high atmospheric pressure it felt sluggish to move, not heavy, just thick.

We found tentacle marks on the ground and capillaries rubbed off the vantaroot stems where the tentacles had grasped. The Orska inflate hydrogen sacs along their thorax to move slowly up and down through the three-dimensional landscape like Venusian gorbors or Earthling sloths. But for us to go up,  we'd have to climb...

...Bright gleamed the lights of the City of Eternal Youth as Curt's small party planed down toward it.  Clear through the night rose throbbing music, the sound of laughter and gay shouting.

"The wicked ones make merry at feasting as they do each night," grated one of Curt's winged bearers.

"There is the Fountain of Life," the other told Captain Future.  "There are  no sinful ones around it at this late hour."

Curt Newton's heart leaped.  At last he looked upon the legendary Fountain that he had won to by such toil and hazard!

The City of Eternal Youth had been built around a circular plaza of large size.  At the center of that plaza yawned a pit, a deep shaft in the rock, no more than thirty feet in diameter.

Out of that pit ceaselessly spurted a glorious geyser of shining, self-luminous water.  Bursting high above the surface of the ground, it kept falling back into the pit, with a dull roaring sound.

This was the Fountain of Life, eternally jetting the Life-water whose insidious poison had been spread by the Life-lord to every world of the System!  It gushed from the darkness in hell-born, maleficent beauty, a luring, beckoning thing whose shining loveliness masked unutterable evil....

The City of Eternal Youth must be the strangest city in all the Solar System.  Its people were all young.  Some of them had lived many life-spans.  All these men and women had come here, drawn by the lure of the Fountain.  And they had found that once they drank its waters they could not depart...  This was the City of loud, joyless revelry, feasting and drunkenness...  Their dwellings blazed with lights as they made merry to forget their inevitable, ghastly fate...

...He started down the slope, half-fearing that some of the equivocal objects around him would reach out their mineral boughs or arms to arrest his progress. They seemed to be a kind of bluish-purple obsidian cacti, with limbs that ended in formidable talon-like spines, and heads that were altogether too elaborate for either fruits or blossoms. They did not move as he passed among them; but he heard a faint and singular tinkling with many modulations of tone, that preceded and followed him along the slope. Eibon conceived the uncomfortable notion that they were holding converse with each other; and were perhaps debating what should be done with him or about him.

However, he reached without mishap or hindrance the end of the declivity, where terraces and ledges of decomposing trap, like a mighty stairway of elder aeons, had rimmed the sunken lake of liquescent metal. Wondering as to the way he should now take, Eibon stood irresolute on one of the ledges.

His train of conjecture was broken by a shadow that fell suddenly athwart him and lay like a monstrous blot on the crumbling stone at his feet. He was not prepossessed by the shadow: it was outrageously defiant of all known esthetic standards; and its malformation and distortion were no less than extravagant.

He turned to see what manner of creature had flung the shadow. This being, he perceived, was not easy to classify, with its ludicrously short legs, its exceedingly elongated arms, and its round, sleepy-looking head that was pendulous from a spherical body, as if it were turning a somnambulistic somersault...

hums and gems on saturn

...he got out his sextant, took the altitude of the sun, got cross-bearings and a few angles, and began to make a rough calculation...

"That humming confuses me so that I cannot work correctly," said he, "while the most irrelevant things enter my mind in spite of me, and mix up my figures..."

Changing their course slightly, they went towards a range of hills, in the hope of finding rocky or sandy soil, in order to test the sounds, and ascertain if they would cease or vary.

Having ascended a few hundred feet, they sat down near some trees to rest, the musical hum continuing meanwhile unchanged.  The ground was strewn with large coloured crystals, apparently rubies, sapphires, and emeralds, about the size of hens' eggs, and also large sheets of isinglass.  Picking up one of the latter, Ayrault examined it. Points of light and shade kept forming on its surface, from which rings radiated like the circles spreading in all directions from a place in still water at which a pebble is thrown.  He called his companions, and the three examined it.  The isinglass was about ten inches long by eight across, and contained but few impurities.  In addition to the spreading rings, curious forms were continually taking shape and dissolving...

John Jacob Astor, A Journey in Other Worlds (1894)

...The cigarette I was smoking fell from my fingers.  The extraordinary creature just sat there, clad in Jonah's jacket, looking at the remains of our meal - and claimed unheard-of things!

"You imply that you have no bodies, in the sense that we and your fish and animals have bodies?" I asked.

He slewed his head round towards me, and I met unforgettable eyes.

"We have highly adaptable, very fluid, body groups," Alpha said coldly.  "You saw the ellipses in which we float; those are the shapes of what you would call our 'easy' state.  Each of us is composed of thousands of filaments, which we can expand to a haze able to pass through air invisibly, or contract to a density able to smash rock.  For large operations we form union of hundreds of body groups and carve a mountain."

As if in answer to his plea, a sheet of rose-colored flame poured from a vent in the side of a mountain nearby, lighting up the region around the ship with a vivid crimson glare.  Steam and lava poured from the mountain side, while the ground shook under the force of the blast.  Dale and Fleming were hurled to their knees.  They made no effort to rise but flattened themselves against the shuddering ground.

To his horror Dale perceived that the ship had landed upon a narrow ledge projecting along the edge of a sheer wall of ice.  Peering cautiously over the side he gazed a thousand feet down into a sea tossing under the shock of the eruption.  Sick and dizzy, he crept back to the sheltering wall of the cliff.  The flame subsided...

…The desert valley floor behind them seemed suddenly to have sprouted some tall bushes.  There were possibly a dozen of them standing at intervals of twenty yards.  They were too far away – perhaps one eighth of a mile – for Dynamon to see them very well, but they appeared to consist of a score of leafless branches radiating outward in all directions from a small core.  It was as if a basket ball was bristling with ten-foot javelins.

“Where did they come from?” Dynamon gasped.  “I didn’t see them when we walked over that ground a few minutes ago.”

“Nor I,” agreed Thamon.  “I can’t imagine where they came from.”

Just then one of the bushes apparently moved a few feet as if blown by the wind.

“Good lord!” exclaimed Thamon.  “Did you see that?  One of those things rolled forward!”

Then another of the fantastic bushes started to roll, and another, and another.  In a moment all twelve of the extraordinary apparitions were rolling rapidly down the wind toward the humans.  Dynamon felt the hair on the back of his neck stiffen…

the contemplatives in the sphere of saturn

The creature was insectivorous.  During each of the periodical winds, it allowed itself to be swooped into the air, maintaining contact with the ground by spinning its lengthy filament.  One end of the threat was firmly attached to a rock by some organic adhesive manufactured within its glands.  In the teeth of a gale, it spread itself wide imitating a parachute net, to trap the millions of insects being dashed about by the wind.  At any time, the kite could descend by "reeling in" on the practically indestructible strand.

"I'm glad we managed to catch a couple of those things," Gerry remarked.  "I have an idea we might make a fortune from them."

"No kidding!  How?  Sell 'em to little boys every March?"

"No, silly.  Get a couple of those creatures to spin a few miles of that amazing filament, and you could weave a coat or any other garment that would never wear out.  Just think what the cotton and wool and silk tycoons would pay us to keep that off the market!"

liliputian men of the grasslands of saturn

…In the far distance, a few hundred miles off, loomed the hazy outlines of trapezoidal mountains.  Apart from them, the scene was one of grass, grass, grass, interspersed every few miles by a dense hunk of taller, darker vegetation…

…He remembered he had landed deliberately at the border of the brighter patch of grass.  Well, before he left, he could at least walk over and have a look at that slightly different area…

…he stopped for a while and listened to the ringing silence around him.  It was extremely important for him, just then, to look back and reassure himself that Jumbo was where he had left it, and that no other additions to the landscape had appeared within his 360-degree field of view.

For now he strongly suspected that he had come upon a secret.

The realm of brighter grass was inhabited.

Semi-transparent humanoids, multitudes of them, six inches high, swarmed almost weightlessly over the grass-blades, hardly depressing them as they leaped from one to another.  Their bodies were a very light blue, but they looked quite human.

They were leaping all the more urgently because they had seen him.  Suddenly the edge of the bright area bristled with what looked to him like little pop-guns, made of stuff that looked solider than the folk who had constructed them… 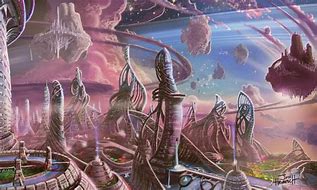