What to see on
vulcan

...Kah made a sign of warning a little later, and they halted.

"We are near the evil ones' citadel," he whispered.  "But the screaming trees will instantly give warning unless we are careful."

Captain Future saw ahead of them an extensive forest of the strange trees, their big leaves hanging limp.

"Walk as softly and slowly as you can," Kah was warning.  "Any sudden movement will set the trees in uproar."

He led the way into the weird forest, moving on tiptoe...

Captain Future thought he understood now, that the weird trees were so highly sensitive to vibrations of the ground that such vibrations set off their hideous clamor...

a vista on small, dense vulcan

...she told me about the weird, dog-like creatures.  The male, exuding a scent - if you could call it that - a vapor which in the air bursts into spontaneous combustion as it combines with the atmospheric oxygen.

How long we ran through what proved to be a maze of passages in the honey-combed ground, I have no idea.  Several Earth miles, doubtless.  Several times we stopped to rest, with the breezes tossing about us as I listened, tense, to be sure the Orgs were not coming.  Then at last we emerged; and at the rocky exit I stood staring, amazed.

...From where we stood the ground sloped down so that we were looking out over the top of a wide spread of lush, tangled forest.  Weird jungle, rank and wild with spindly trees of of fantastic shapes, heavy with pods and exotic flowers and tangled with masses of vines.  Beyond it, far ahead of us there seemed a line of little metal mountains at the horizon; and to the left an Earth-mile or so away, the forest was broken to disclose a winding thread of little river.  It shone phosphorescent green in the half light.  The storm was over now, but still the colors lingered in the cloud sky - a glorious palette of rainbow hues up there that tinted the forest-top...

fatal attraction of the hot side of vulcan 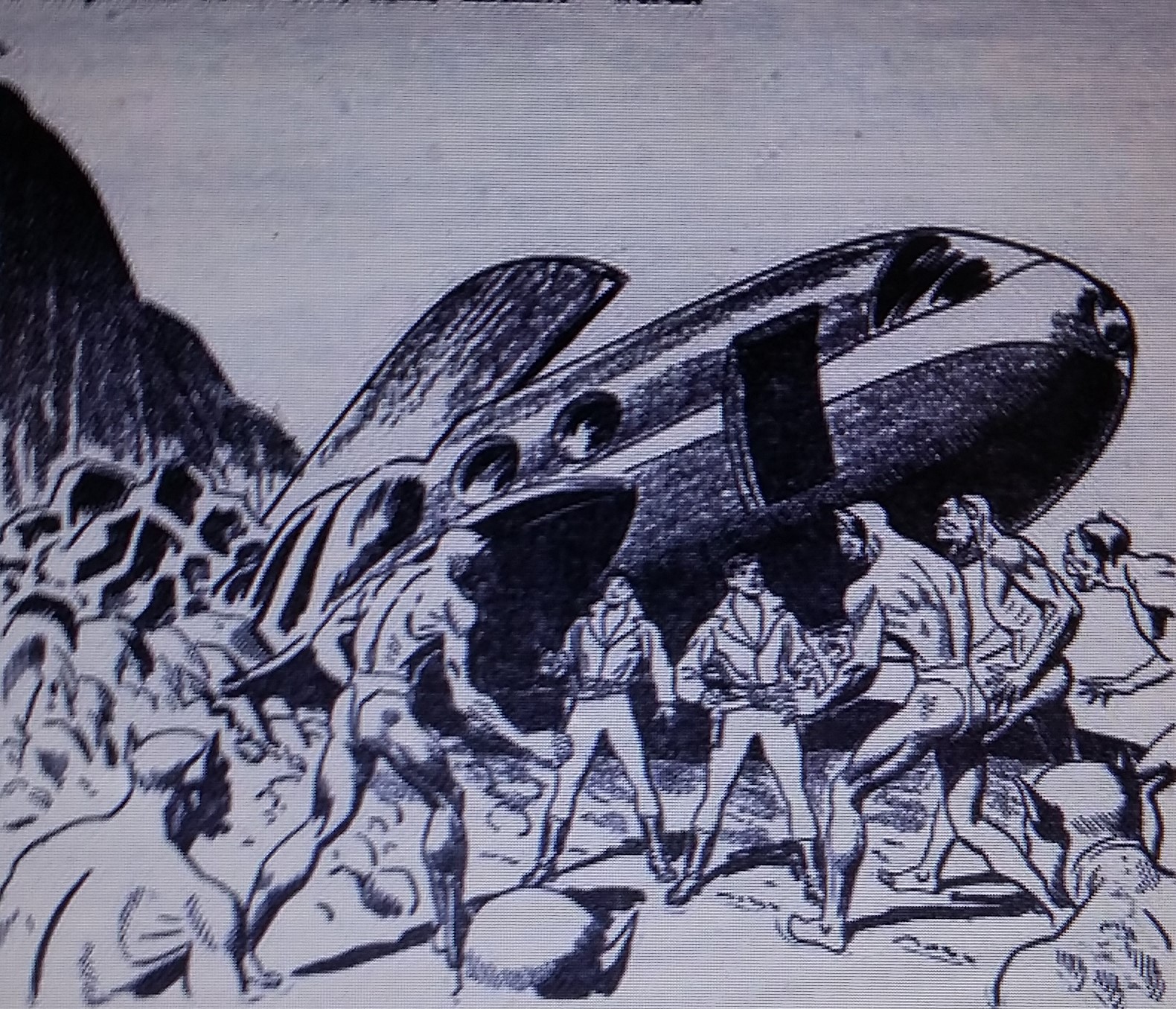 the Baimers surround the Earthmen

…I lay in my dark bark-tent during the sleep-period later on, and a monstrous thought was growing in my head, entangling my soft brain in sinuous, intangible tentacles.  I could not evict it.  It stayed.  It drummed at me, this thought:  To the Rim, in the Sixth Brightness, you will now go.  Toward your destiny, toward where the Light Giants cavort, on the Edge of the Molten Land.

Go! In the Sixth Brightness!

On that insidious thought I was drugged to sleep – and wakened hours later with Will’s cry blasting in my ear.

I was on my feet, my brain crystallizing into cold, calculating thought.  I dressed in my whipcords, pulled my heavy shirt on, then faced Will…

The sky was a madhouse of light.  It was the Sixth Brightness.

I looked up Oro Tarkid, but already he was moving off, at the head of his tribespeople.  The village was folded up, gone as if it had never existed, and there were nothing but carts, and solemn-faced Baimers, moving with giant pace off toward the brightest, fieriest spot on the horizon.

“Oro Tarkid!” I yelled, panting beside his giant stride.

He looked down at me from his great height, and it seemed as if for a moment he had to puzzle out who I was…

“The Time has come,” he said gently.  “We must go now.  Thus it has been for seventeen years of our time.  Always we move – toward the Rim.”  He paused, looked at the Rim, and I thought I saw a deadly fear twist his flat face.  But it passed…

He did not look at me, but at the Rim.  The titanic glory of those Sun-gorged flames seemed to light his countenance with a spiritual, inner well-being.

He raised his massive arm, shook it like a crusader.

“We shall go,” his voice thundered out in a paean of triumph.  “We go – to our destiny!”

I could keep up with him no longer.  I dropped behind.  I fell to a sitting position, sobbing in great breaths of air, consumed with a rage that burned as fierce as the Hell toward which they were moving.  I sat there, and watched them move off, swiftly, diminishing toward a great spume of cascading light on the Rim…

a swarm of electric beings on vulcan

Out of the silence, a vast rumbling sound rose like magnified thunder. Mark saw Carston fumble with his radio-phone then peer all about into the haze.

"Blitzees coming!" he yelled into his instrument.

Everyone stopped. Mark followed Carston's line of sight, but he couldn't see a thing.

The Commander moved hurriedly along the line. "Lie down everyone, face to the left! Upend your sleds and if you value your lives, stay behind them!"

For a second all was confusion as the men flung themselves to the powdery soil; then a metal barrier sprang up as the sleds came end to end. Still nothing could be seen.

Suddenly then they came. The air was blue from crackling sparks as dozens of the Blitzees struck the sleds with the impact of bullets. A sound like the humming of millions of hornets was in their ears, as the greater part of the swarm passed overhead. Mark had a confused vision of electric blue streaks that writhed and zig-zagged, landed and leaped again, propelling themselves blindly. As suddenly as it had come, the danger was over.

The men arose somewhat shakily.  The ground around them was strewn with the snake-like Blitzees.  Mark picked one up and found it to be metallic, about five inches in length, transparent blue in color.  The head was triangular, eyeless; along its back Mark felt a thin, wiry sort of filament!

“They’re like living bolts of electricity,” Carston told him.  “They seem to short-circuit themselves when they strike the sleds.”  The caravan continued.

Hours later they arrived at their destination, a small rise in the terrain before them, covered with glittering crystals in huge, boulder-like clumps.  The sides of the little hill was [sic] composed of the same ore, apparently in limitless amount.

But as if guarding it against them, rows of reddy-glowing Vulcs stood motionless, elephantine,  facing them.  Mark couldn’t tell whether they were friendly or hostile.  To him there was no expression to be seen on those fluid heads…

Albert dePina and Henry Hasse, Alcatraz of the Starways (Planet Stories, May 1943)

THEY were outside then and Luke essayed a deep breath, a breath that was chokingly acrid in his throat.

"Waugh!" he coughed, and spat. One of the guards laughed.

Any foul epithet that might have formed on Fenton's lips was forgotten in the sight that met his eyes. A barren and rugged terrain stretched out from the landing stage, a land utterly desolate of vegetation and incapable of supporting life. Pockmarked with craters and seamed with yawning fissures from which dense vapors curled, it was seemingly devoid of habitation. And the scene was visible only in the lurid half light of flame-shot mists that hung low over all. In the all too near distance, awesomely vast and ruddy columns of fire rose and fell with monotonous regularity. For the first time, Luke experienced something of the superstitious fear exhibited by even the most hardened criminals when faced with a term at Vulcan's Workshop. That term, to them, meant horror and misery, torture and swift death. And he, too, was ready to believe it now.

He was prodded down an incline that led from the landing stage to the rocks below. The guards from the ethership, he saw, remained behind on the platform and there were new guards awaiting him below. Husky fellows, these were, in strange bulky clothing and armed with the highest powered dart guns. The other prisoners from the vessel were already down there, a huddled and frightened mass—a squashed pile, almost—silent now and watchful of their jailers.