be seeing you
by
dylan jeninga 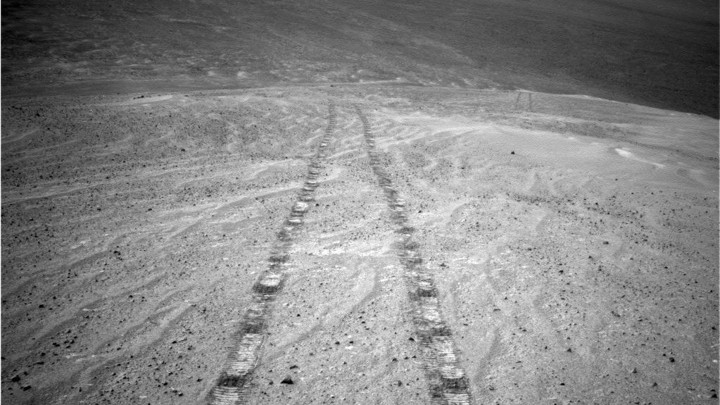 She barely remembered Home. Sometimes, when the road was long and easy, she'd pass the time trying to picture it.  All she could muster were flashes, meaningless and enigmatic, but tinged with gentle warmth.

Often, though, the road was hard, and she had to pick her way carefully over sand traps and unstable footing. When it was especially difficult, Home would pester her for updates.

“My battery is full,” she’d say to the empty air, “and the sun is shining.”

She'd been born, really born, in the windswept deserts that were all she’d ever really known. She’d woken up one day and rolled out of her metal womb, flinching as she touched the sand, the cold of it coursing up through her wheels like an electric shock.

“This is Mars. You’ll work here for ninety days," the voice of Home had sounded in her head.

Obedience came naturally, and without thinking she unfurled the panels on her back like wings. The sunlight poured life into her, pushed the iceness from her tingling circuits.

“Drive forward, and extend your arm.”

She’d complied, doing her best to drill into the soft, banded rock they’d selected for her.

“Was that right?” She’d asked, “Did I do good?” But there was no response.

That was the first day. She soon came to realize that ninety days was a long time. She counted down the time until her mission would be done, and to pass the hours she talked to Home. She told them about the many-colored rocks she found, the crater walls that reached up to the pale sky, the chill sand that clung to her wheels. She described in riveting detail the battling moons that again and again charged each other until she was sure they would crash, only to slip past at the last minute, leaving her speechless every time. She gushed about the billion pinprick stars that filled the sky after sunset, turning evening into an extravaganza of light. Home never had any comment, only occasionally breaking the long silences to inquire about her status.

"My battery is full," she reported once, "but my arm is stiff. " It occurred to her that Home must either not be able to hear her, or be uninterested in anything but her work. So she resolved to commit herself wholly to that.

Finally, at the end of ninety days, she stood at the crater rim, looking out over the land that she'd come to know as well as her own mind.

"Did I do good?" She questioned.

Her response was a set of directions, guidance to another crater to the southeast.

"How many more days?" But she didn’t expect a reply.

Her first impression of Mars was vast emptiness. As the days wore on, though, she discovered companions in the hurtling moons, the nurturing sun, the quiet mediation of the land itself. These friends listened without judgement, and she confided in them things she didn’t want Home to hear. She told them how frustrated she’d been the time her wheel got stuck in a dune, and about the way dust devils made her uneasy, because their appearance meant a storm was on the approach. More than that, she laid bare for them in whispered tones her fear that she might never be good enough no matter how hard she tried. Always, the sun would shine, the moons would spin, and Mars would abide.

On and on she trekked. She became her own cheerleader. Her panels were as beautiful as the gypsum that streaked through the rocks, her work was as steady as the wind, her tenacity as solid as mountains. Even if she were all alone in the world, she was enough.

When the dust devils began to gather in greater numbers than she'd ever seen, however, she was relieved to get a message from Home.

“A storm is coming. Update.”

"My battery is full, and the sun is warm." In truth, her shining companion was flickering a burnt orange.

"The storm is far bigger than any you’ve ever faced. Follow directions to shelter.”

A frigid sliver of fear pierced her heart. Sand picked up and danced, swirled around her, weaving through the spokes of her wheels and resting on her back. The storm thundered on the horizon, a rolling wall of dust, clouds that hid the moons and turned the sun into a dim, fiery pinprick. She struggled to see, but the growing shadows hid loose boulders and other unknown perils. Gathering her courage, she pushed on along the path Home had set out for her.

"My battery is lower, and there’s dust on my panels."

"The storm is almost on top of you."

She fought to gain ground. The sky was black, broiling and angry. Lightning screamed, the charged air pricked her with needles of static. Sand and grit lodged itself in the joints of her arm and the axles of her wheels, slowing her down. She wasn’t going to make it to whatever shelter was out there.

"My battery is low, and it's getting dark."

She was stuck. The driving sand piled against her sides, burying her wheels, and no matter how hard she pushed she couldn’t break free. Dust choked her, smothering her panels and starving her of what little light survived to reach her through the tempest. The cold seeped into her frame. Her thoughts came haltingly, stuttering, fading even as she wrestled to move forward another inch. One question burned its way to the front of her wavering mind.

The storm raged on, but she didn't feel it. She felt warm, like when she remembered Home.

Months later, when the sky started finally to clear, a message was able to penetrate the dust-laden air. It rang over the empty hills and dry riverbeds to the quiet valley where a set of solar panels like wings poked from the dust.

I'll find you in the morning sun

And when the night is new

I'll be looking at the moon

But I'll be seeing you.