[ + link to:  A Distant Sun ] (note: this refers not to another star but to our Sun distant in time) 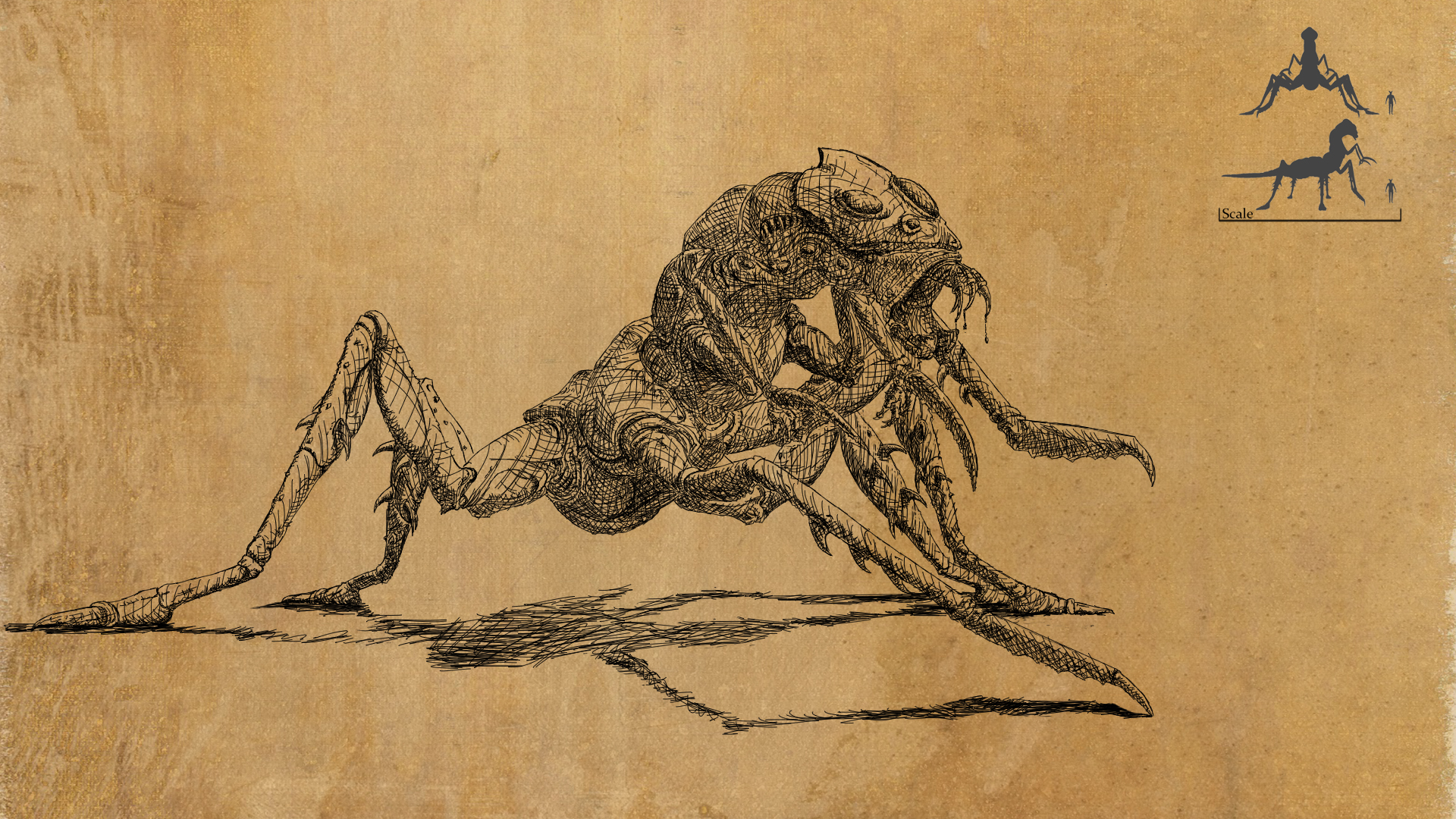 Standing 6 meters tall and twice as long fully extended, the Gloomstalker is a scourge of the Undergrowth in the Steaming Jungle. Few has ever caught sight of the Gloomstalker, and of those that do, none survived. Its sleek body is covered with a dull carapace that absorbs light and sound, letting it flit past its prey undetectable and become part of the shadows in the perpetual twilight of the Undergrowth.

Two pairs of clawed legs with irregular spikes growing from it, allowing it to hook and cut into the woods and plant matter of the Undergrowth with ease. The Gloomstalker uses these to  climb with great agility, often climbing to a greater height before dropping down to its unsuspecting prey, where it would strike with another pair of legs tipped with jagged scythes, cutting through bones with ease. Its flexible tail is tipped with a sharp bony extrusion that it uses as a spear.

The Gloomstalker is perfectly adapted to the Undergrowth. While its enemies cannot sense it, it has sensory organs all across its sides and head that could pick up movement from several hundred meters away. Cunning and malicious, the Gloomstalker possesses a sadistic intellect. It enjoys toying with its prey. It likes to stalk a prey for several miles studying it, then sneak up behind and strike with a maiming blow. Allowing the unfortunate creature to escape, the Gloomstalker takes its time to chase the prey down, making nasty surprise attacks and hurting the prey just enough for a wound but not enough to kill. The smell of fear is intoxicating to the Gloomstalker and it will drag the hunt out for several hours, delighting in the torture.

When the prey becomes too weak to run any further, the Gloomstalker will secrete a venom from its fangs so toxic that it would eat through flesh. The Gloomstalker then drips the venom onto its prey bit by bit, drawing out the torment of the venom burning through the victim for as long as possible, milking every last drop of excruciating pain. Such pain excites the Gloomstalker and the louder the victim screams, the more excited it becomes.

When it can wring no more amusement from its victim, the Gloomstalker will swallow the prey whole before retreating to its lair to digest.

It is a solitary hunter, and it is not known if there are others of its kind. As the Undergrowth remains terra incognita, the origins of the Gloomstalker is a mystery, although ancient scars on its carapace suggests that this creature must be hundreds of years old at least.

The Gloomstalker has no natural enemies. Not only does it have a tough protective carapace, it has an incredible leap and agility that allows it to disengage from an encounter that is not going well. Its sensory organs can pick up even the slightest movements via some unknown method from living creatures in a radius of several hundred meters. This makes it impossible to surprise the Gloomstalker.

The Gloomstalker also has a powerful caustic venom that can dissolve most organic material, and an injection from its bite invites a swift and painful death as the venom melts through the internal organs of its victim.

This creature also has the capacity to reason, albeit in an alien manner. It has undeveloped hands at the end of its foreclaws that nevertheless allows it to manipulate and make simple tools.

It has no observable habits beyond its sadism, and does not lair in one place for long.

>>  Field Notes for a Far-Future Mars - and beyond