Skyyon is the city at the "Sunward Pole", that is, it stands where the Sun is at the zenith. 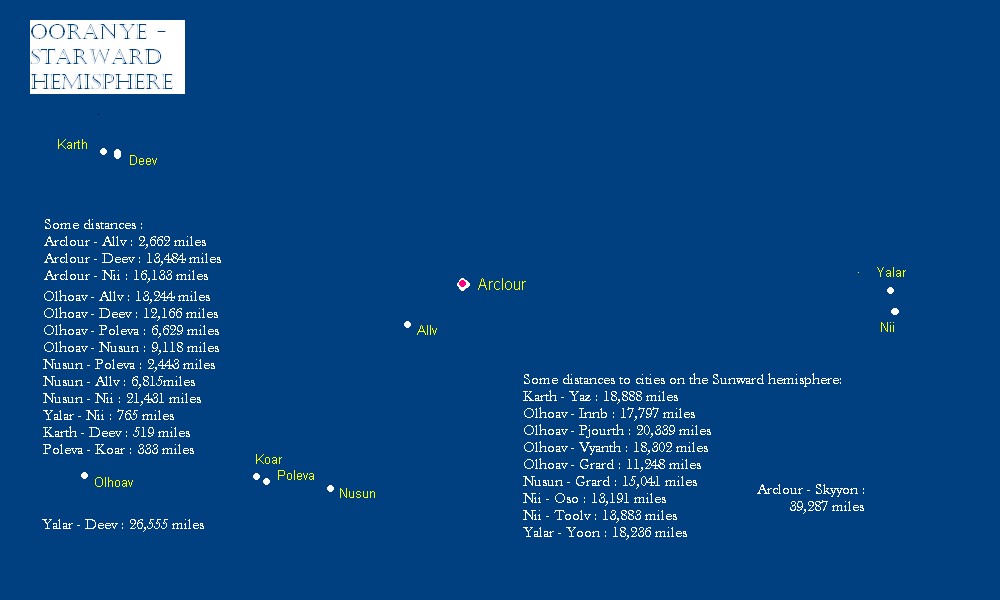 ...and you can see another map on the page for Uranian Gleams (and an additional one in the book itself).

Cartography is one of the most highly regarded sciences on Ooranye, but you would not think it from the simplified maps shown here.

The maps actually used by Uranians look very different.  They are streaked by "peril-contours" (or "safety-contours") called "sfy", which join places of equal danger.  The data for these are gathered by wayfarers, in the simplest possible manner: either the wayfarer arrives at his destination or nen does not.  Each arrival or non-arrival is reported, and plotted into a map by a cartographer.  The most important contour is sfy-50, the boundary between Syoom and Fyaym, for the definition of Syoom is "the land in which a lone wayfarer has a more than 50 per cent likelihood of completing a 1000-mile journey alive".

Here we do not attempt to reproduce map in the Uranian style - a style which, to the Terran lay reader, would appear as too subjective and in many respects incomprehensible.  Our maps of Ooranye simply use the data we have gleaned about the relative positions of the Uranian cities and the distances between them.  (For the distances themselves, see the text for individual in the Survey.)  However, there is one Uranian artistic convention which we have followed: the basic colouring of their maps is rather reminiscent of some decorative star maps, the cities being the stars, the land between them space.  It is symbolic of the cities' role amid the vast, lonely plains of Ooranye.

Note that the Uranians do not use latitude and longitude.  Nor do they have a magnetic North.  Since their planet faces always the same side to the Sun, the place they hold equivalent in importance to our "North Pole" is the subsolar point, where the Sun is at the zenith: namely, the city of Skyyon.  And on the opposite side of the planet is the Starward hemisphere, centred on the antipodes of Skyyon, namely, the fabled land of Arclour.

The wayfarers of Ooranye steer by means of a device which we have decided to translate by the word "compass" though it uses not magnetism but an analogous force, attuned not to a magnetic pole but (in the cheaper, most widespread versions) to 3 out of the 25 individual "chelthan-lodes" in each of the 25 disc-on-stem cities of Ooranye.  Thus, a glance at the dial will show the wayfarer his distance from those three cities, and these data are sufficient for him to calculate his position.

Apart from compasses, it needs to be admitted that Uranians have a superior ability to carry around in their heads a reticular plan of the distances between the cities of Syoom.  This partly explains why they have never evolved a latitude-longitude grid: they have never felt the need for one.

Lastly, mention needs to be made of the extremely rare and priceless device known as the banyssyen, only a few of which were made, and which circulate in a dramatic manner through Uranian history, turning up at times of fateful decision.  A banessyen ("moving-map") is a lenticular object which, when held in the hand, depicts by means of shifting lines and shapes and colours, the situation of the holder.  The codes it uses are understood subliminally, in a different way for each individual.  Obviously such a device must count among those artefacts of the Phosphorus Era which draw their power from an extra-dimensional source.  As described in the saga Petraym Lairvdon in Zaalv:

He moved through the gloom of the mist-shrouded forest, giving almost all his attention to the disc he held, rather than to the obscure forms which loomed to either side of his route.  The banessyen's flashing centre-dot marked his position, and his companions were so close to him that their dots merged with his; round them, crawling on the lens-shaped surface, were shapes which a human eye and brain were apt to regard as pictorial Unlikelihoods, Confusions, various clumps of Poignant Uneasiness - all subliminally grasped without translation by any reason.  The device was a tool for survival, not understanding....