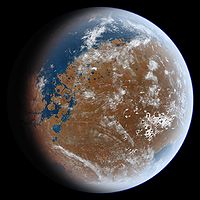 Arrrrr, a third pirate tale in Old Mars. One might almost begin to suspect there was something about Mars, the god of war, that compels authors to people it with corsairs. Where The Wreck of the Mars Adventure and A Man Without Honor centered on freebooters transported to Mars through one means or another, Mariner by Chris Roberson flips the script: our Earthly hero is transported to Mars, there to find the pirates already waiting.

Jason Carmody, our hero, has sailing in his blood. After reading in National Geographic about a teenage boy who sailed alone around the world, he dedicates himself to accomplishing the same feat. After years of practice at navigation and the mechanics of sailing, he finally sets out, only to be sucked into a portal shortly after departing and becoming cast away on a strange planet where the sands act like water and the aquatic natives survive in disparate networks of canals.

He was on Mars, he would later learn. Not the Mars he’d seen in pictures sent back by NASA proves, though. Had he been transported to the distant past of the red planet, or its future? Or perhaps into some analogue of the fourth planet that existed in another dimension?...

...The cutter lay half-buried in the fine sands, under a brilliant blue sky, across which two moons sailed in their stately orbits toward each other. Jason had stepped off the deck of his boat onto the sands, in a daze, and immediately sunk up to his waist. The grains of sand were so small, so fine, that the ground behaved more like a liquid than a solid, almost like quicksand. And as he floundered in the sands, barely able to keep afloat, he noticed the menacing silhouette of a bony ridge knifing through the red sands toward him.

Jason is rescued by Martian sailors, bipedal natives with blue-green skin who survive out of the water with the help of breathers worn over their gills. His reprieve is short lived, unfortunately, as these Martians belong to the Praxians, Mars’s equivalent to communists. These ones are a bit more religious than their Earthly counterparts, though, and they don’t care for Jason’s assertion that he comes from Earth instead of holy Mars, the source of all life. So they throw him in a dungeon, where he meets Tyr, a priest of the Suffocated God, and together they make their escape and enter into a life of piracy.

To balance the Praxians, Mars also has its own capitalists, who aren’t any nicer: the Vendish, ruthless slavers who are quick to indenture any foreigner on their lands who can’t prove residency. Jason understandably abhors them as much as he does the government of Praxia, and happily pillages their ships with the help of Tyr and the crew of his new ship, The Argo. When he captures a Vendish ship ferrying slaves, however, he runs into the problem of just what to do with them, and so the plot thickens.

As the penultimate entry in the anthology, Mariner is pretty good. Its take on the canals was unique, and I found myself getting attached to Tyr and his “suffocated god”. The antagonist, Rac, is two-dimensional, but for the purposes of the story he does fine.

When he isn’t out pirating, Jason lives underwater in a community of pirates, a sort of Libertalia on Mars. He accomplishes this with the help of a diving suit and a house sequestered with airlocks, but I wondered as I was reading where those things came from. It may be a nitpick, but I have to ask, why would the Martians ever develop the technology to allow an air-breather to survive underwater?

Overall, though, I don’t have a whole lot to say about Roberson’s entry. It’s a solid tale of swashbucklery, in an anthology with more such swashbuckling than one might expect. That’s not a criticism of the story itself, but I am a bit baffled that “pirates on Mars” became a pattern.

Next time, we tackle the final story in Old Mars, “The Queen of the Night’s Aria” by Ian MacDonald. I remember it being one of my favorites, and I’m really looking forward to reading it again.

May your sandships never sink, my friends!