the rings of saturn in the old solar system

The environment of the Rings of Saturn - billions of icy boulders swarming in orbits around the giant planet - is both fantastic and true.  You might think that the literature of the Old Solar System could hardly add any wonder to what we already know as science fact - 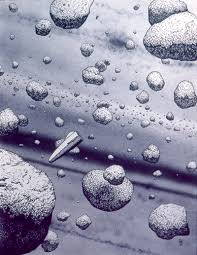 Except that Hermit of Saturn's Rings adds the idea of strange, menacing life.

...The knocking and pounding mystified them all.  Then a new note of alarm rose from the control room.

"It's getting into the airlock!  A long, thin stream of it is pouring in like a jet of steam!"

The spaceship City of Fomar is the first to attempt the exploration of the rings.  Old Jasper Jezzan, veteran space hand in his seventies, is on a shift in the air rejuvenating chamber, listening in to the comments in the observation room.

"Put a good head of air into the lock!"

The old man sprang to the controls and heard the air go hissing through pipes on its way to the airlock.

"That damned stuff is still coming in!"

"The air is leaking out!"

"It's driving the mist away outside!"

"The white stuff inside the lock is expanding!"

Read in the right mood, this rising panic and amazement can touch some non-trivial chords.  We don't really know what we're going to find out there...  and the shrill voices of the crew can get to us, with a whisper of insight: there's something true in the tale, and if it doesn't happen in Saturn's rings it will, nevertheless, happen somewhere...

Stid:  Back to the story, Zendexor, and stop trying to make my flesh creep. 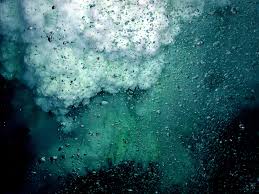 Zendexor:  Don't blame me, blame the universe and what it may contain...  there is something particularly upsetting about malign gaseous life-forms, in my opinion.  Like the one in The Searcher - though that unforgettable tale is set a long way outside the Solar System.

Harlei:  Upsetting because, I suppose, a gaseous monster must be especially difficult to get away from...

Zendexor:  Though in both stories, luckily for mankind, the monsters seem restricted to a particular haunt.  Schmitz's "Searcher" lives in a nebula; Jones' white mist-creature seems confined to Saturn's Rings.  Tough luck, though, on those who encounter them...

Jasper was given a sudden order to stop the air.  He never did know why.  No one lived to tell him.  He heard many voices risen in alarm, too mixed and garbled to understand little more than the fact that the inner door had been forced.  And then the other one once more yielded.  The white stuff was coming inside, and the air was leaving the ship.  This last fact Jasper's horrified eyes took in at the gauges.

Sharp cries and awful screams came to him, screams which shuddered, were muffled and cut off short.  This did not last very long.  Soon, an ominous silence reigned.  The white mist still veiled the port, and it was inside the ship, too.  Jasper pulled himself together and ran down the corridor to close off that part of the ship.  Too late.  The white mist already curled along the floor and walls of the corridor exploringly in substantial volume.  As if it felt his presence, it spread alarmingly fast in his direction the minute he stopped halfway down the corridor in dismay.  A veil of the awful material streamed smokily across the ceiling and waved a curling pedicle almost in his face...

You get good value story-telling in the eighteen pages of Hermit of Saturn's Rings.  It is a nice little epic of personal survival, the more original in that the hero is not a young man but a fellow in his seventies.  Jasper Jezzan lives for several years in the Rings, alone except for his misty adversary.  He outwits it and finds ways to fight back, but the loneliness is something he can't beat... 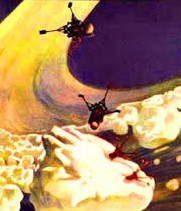 Stid:  More cheerful, in that respect, is The Martian Way.  No loneliness there.  An expedition to Saturn, launched by the colonists on Mars, to take some ice from the rings and bring it to the parched Red Planet.  A success story.

Zendexor:  I thought of including it in my Mars page but really, there's nothing OSS about it.  The story is very realistic in modern terms, both about Mars and about Saturn.  It's a tale of adventurous political and economic problem-solving.  No chance of finding evil white mists in Asimov's account of the Rings.  No horror.  Beauty and fascination reign supreme.

Most of all he liked to watch the rings.  At the left, they emerged from behind Saturn, a tight, bright triple band of orange light.  At the right, their beginnings were hidden in the night shadow, but showed up closer and broader.  They widened as they came, like the flare of a horn, growing hazier as they approached, until, while the eye followed them, they seemed to fill the sky and lose themselves.

From the position of the Scavenger fleet just inside the outer rim of the outermost ring, the rings broke up and assumed their true identity as a phenomenal cluster of solid fragments rather than the tight, solid band of light they seemed.

Below him, or rather in the direction his feet pointed, some twenty miles away, was one of the ring fragments.  It looked like a large, irregular splotch, marring the symmetry of space, three quarters in brightness and the night shadow cutting it like a knife.  Other fragments were farther off, sparkling like star dust, dimmer and thicker, until, as you followed them down, they became rings once more...

Harlei:  Beautiful - and as you said at the beginning of the page, Zendexor, the truth is as marvellous, physically, as is OSS fiction.

Zendexor:  Yes, but, you're about to ask, for the sake of the more-than-physical, for the biological, let's get back to stories of a Solar System which harbours extraterrestrial life.

Time to shift our focus to a delightful little tale I found the other day when pottering around my collection of old magazines: 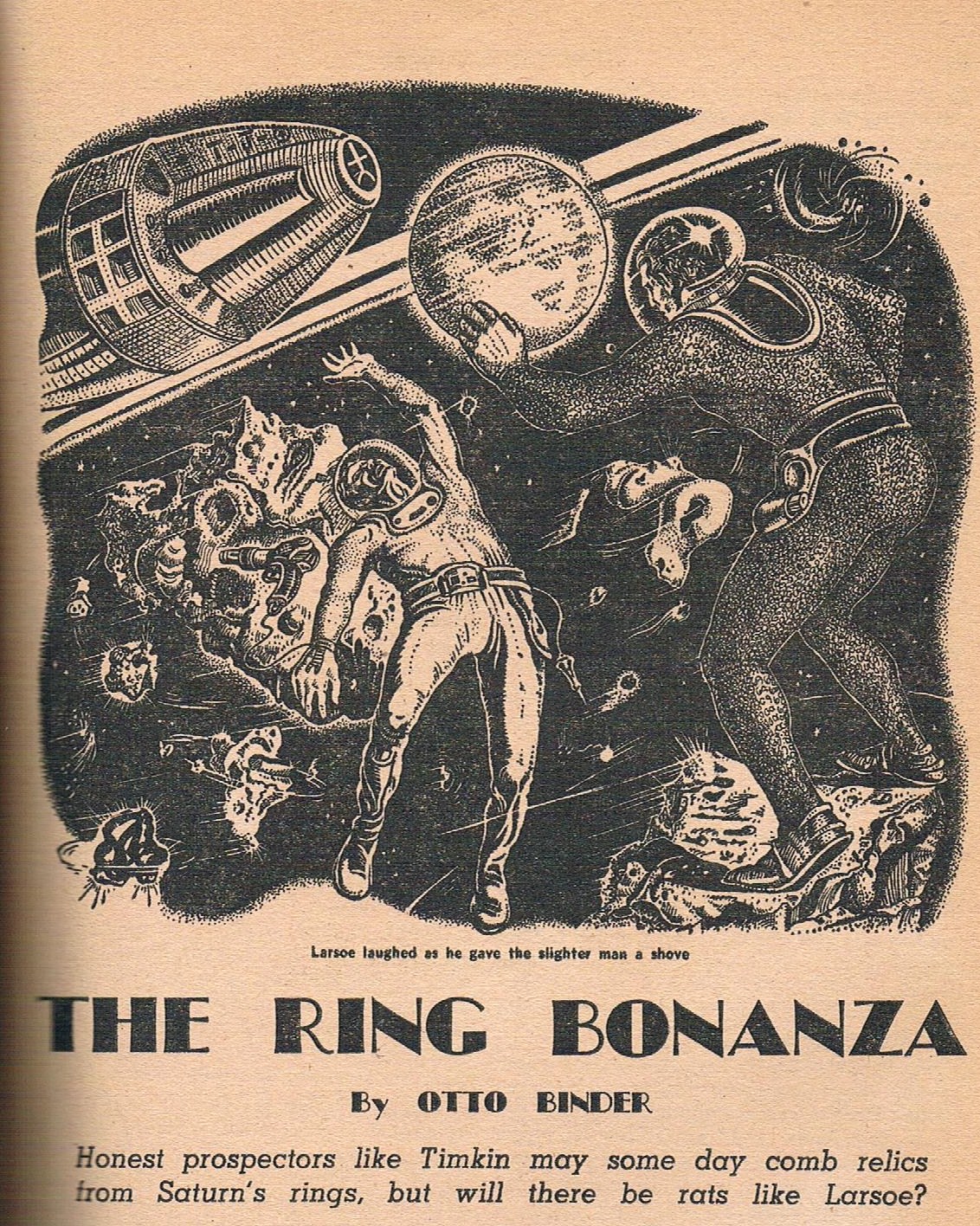 The Ring Bonanza gives us space miners and claim-jumping villains, in the manner you so often find them clunking around the Asteroid Belt.

Had he struck it rich this time?  Through his binoculars, a moment ago, he had seen the glint of one small jagged lump among the ring debris - and it had glinted like gold or silver.  There was vast treasure among the rings, if one could find it...

In this scenario, however, it turns out that there are more ways to get rich than simply by finding precious metals.  The Rings were the remains of an inhabited moon that broke up.  And artifacts and inscriptions have been found in the fragments of that little world.  The scholars of Earth have not been able to decipher the writing, and they'd pay plenty for a means to compare it with the known script of Rhea...

So that's the background for you.  But the prospector-hero has no idea of the way his luck is about to turn.  The glint of "gold" turns out to be pyrites - useless stuff.

...He had been out a month now, and no bonanza.  Of course, it had been so for the past ten years.  Each year the old prospector hoped for his big find, and each year he only eked out a precarious living, picking up odd bits from the rings.

He looked with bleary eye over the plane of the rings, stretching vastly in all directions.  Timkin was not young any more.  His lean spare body could not stand the rigors of space much longer.  His leathery, seamed face showed the strain of countless near-escapes from death.  If he didn't strike it rich this trip he'd have to retire - poor.  He'd be one of those derelicts, haunting the Titan docks and mooching meals.

And he has to contend with the villain, Huck Larsoe, who (apparently) robs him of the riches he eventually finds, and (apparently)...  but I won't give the game away.  A nicely constructed tale which ends with a perfect irony.

Following on from the idea that the Rings were once an inhabited world, we come to the ultimate connection with life and purpose - the idea that the Rings are actually artificial.  For that notion, I refer the reader to Prisoners of Saturn.  In that tale the super-powerful Saturnians condenscend to allow many crumbs of knowledge to the explorers from Earth, but become snappish and secretive when questioned about the Rings.

...Paul asked if it were possible for us to be shown a view of Saturn's rings, and instantly a screen flashed, piercing the cloud gases, and revealing the wonder of all spectacles - the whirling banks of light and heat which encircled the giant globe.

Wide and shimmering, I remember they were, three in number, slightly inclined to the planet's orbit...  The unutterably bright main rings appeared to flow, like rivers of molten particles, round the planet; and their diameters were prodigious, even in the reduced scale of the mirror by which we looked at them.

"Does your 'energy screen' balance from the rings?" Jonah asked.  "I suppose, really, the whole weight of atmosphere - "

"You requested a sight of the bands," Alpha snapped at once.  "We will not answer questions about their nature."

For actual cities sited upon the Rings of Saturn, see the OSS Diary for 10th January 2017.

For issues raised by the fact that Saturn's satellites mostly orbit in the ring plane, see the Diary, Suspension of disbelief: search for a rule.

› The Rings of Saturn