Just over sixteen pages of pure literary gold, this superb vignette is unexcelled as a snapshot of the classic, open-air-habitable, canal-networked Mars.

It's one of the greatest stories by a very great writer, who - in this case especially - transcends his own harsh philosophy and shows, artistically, that "less is more". 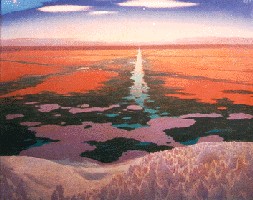 The view was not much.  To eyes which had seen the landscapes of Earth it was not a view at all so much as just another section of the regular Martian backdrop.  In front and to the left smooth water spread like a silk sheet to the horizon.  A mile or more to the right lay a low embankment with yellow-red sand showing through rush-like tufts of skimpy bushes.  Far in the background rose the white crowns of purple mountains.

In the mild warmth of noon Bert let his boat carry him along.  Behind him, a fan of ripples spread gently and then lapsed back into placidity.  Still further back the immense silence closed in again, and nothing remained to show that he had passed that way.  The scene had scarcely changed for several days and several hundred miles of his quietly chugging progress...

Stid:  You can't afford to quote too many paragraphs of masterly description, out of such a placid short story, else you'll be left with nothing else...

Harlei:  Placid?  Anything but.  It's a tale of struggle against horror.  The horror in Bert's mind.

Zendexor:  Stid's partly right.  The horror is just a memory; peace is on offer.  An end to striving.  There's no going back to Earth because there is no more Earth to go back to.  All that's left is to live.

Sometimes the earthman can take it; sometimes he can't...

It's highly realistic, psychologically, the way the deeper grows his love for the Mars girl Zaylo, the more the horrendous recording in his brain fights against his natural wish for life.

Let's hope that such a memory will only ever be explored in fiction.

The sight of the crackup of Earth.

...Exactly what had taken place on Earth, none of them knew, nor ever would know.  His ship had been four days out from the Lunar Station, bound for Mars, when it happened.  One of his mates, a man a little older than himself had roused him from his bunk and dragged him to the port-hole.  Together they had gazed at a sight which was printed for ever on his memory: the Earth split open, with white-hot fire pouring from the widening cracks.

Bert was one of the very few lucky survivors: those who happened to be on, or headed for, Mars.  A few hundred remaining Terrans - that's what's left of the human race.

Under such circumstances, what could one make of the rest of one's life?

Chug around the canals of Mars; be a tinker, a handyman, living lazily, day by day.  Trying for peace.

...There had been the business of getting to know the Martians, and of finding them quite unlike what he had been told.  That had involved learning languages completely different in structure from his own, and the local variations of them, and he had kept at it until he spoke four patois better than any other Earthman he knew, and could get along comfortably in several more.  He found that he usually thought in one of them nowadays.  Along canals which were sometimes like calm seas sixty or eighty miles wide, and sometimes less than a single mile, he chugged slowly from one cultivated site to another.  The more he saw of the huge waterways and their multiplicity, the greater had grown his first amazement at them; nor after years of travelling them was he nearer an understanding of how they had been built than when he first set out.  The Martians could tell him nothing when he asked: it was something which had been done by the Great Ones long, long ago.  He came to accept the canals with the rest and was grateful to the Great Ones, whoever they might have been, for providing the smooth lanes all over their planet.

He grew fond of the Martian people.  Their quietness, their lack of hurry, and their calm, philosophic ways were a soothing antodote to his sense of drive and thrust.  He found out quite soon that what his companions had called their laziness and effeteness was a misunderstanding of minds that worked differently in some ways, and certainly saw life differently; whose conception of the virtues was altogether alien, and he found out how his abilities could help their deficiencies in exchange for the foods they knew how to grow.

Thus he had wandered back and forth mending and making in exchange for his keep, never staying long anywhere...

Harlei:  I must admit, I would like that kind of life.  Exploring Mars day by day, without commitments... utter freedom!  And there'd be the chance, maybe, to solve the mystery of the Great Ones.  If only Wyndham had expanded this tale into an entire novel, what an absolute stunner it would have been!

Zendexor:  Perhaps it could have been done.  On the other hand perhaps, if it had been done, it would not have found a publisher.  Wyndham had enough trouble getting it into print just as a short story.  As he says in the introduction to his collection The Seeds of Time, "...it was swiftly returned by an American agent with the hurt reproof that it wouldn't do at all: this kind of thing, as I ought to know, hadn't a chance unless it was packed full of adjectives and action..."

Stid:  Fortunately, he kept trying.  But to get back to Harlei's point: we are, actually, told a little bit more about the ancient Great Ones.  And the information is given us in such a way as to help fill out our impression of the present-day Martians; for it comes in the context of Bert's wonder at their practical simplicity:

...The utterly unmechanical quality in them astonished them yet.  It was something they had never developed beyond absolute necessity.  He had wondered if it and the passiveness which was also so different a characteristic from the nature of the Earthmen might be due to their never having been the dominant race on the planet until there was little left to dominate.  The mysterious Great Ones who had built the canals, the now fallen buildings and cities, and who had in some way vanished, centuries or perhaps thousands of years ago, had been the rulers: it seemed as if under them the idea of warring and fighting had had no chance to develop, and the mechanical sense no need.  If so, it was a tradition planted firmly enough never to be lost.  At times he felt that there was a lingering subconscious sense of taboo about such things.  They still looked for their blessings to the Great Ones who "remembered".  Bert would have very much liked to know what those Great Ones were and even how they had looked, but no one could tell him...

Zendexor:  With all these interesting but general remarks, the reader of this page may get the false impression that the tale is about species rather than individual relationships.  This is not so.  We meet individual Martians, and indeed the story's climax revolves around Bert's resistance to happiness.  What he has seen - the death of his world - renders him unable to abandon his overpowering mistrust of Fate.

That gives an extra psychological dimension to the story; but even without its tragic theme, it would have been a wonderful evocation of Mars.