Of all sf authors Edmond Hamilton seems the most casually, nonchalantly adept at faithfully reflecting the characters of Old Solar System worlds.  His is a light and expert touch, reassuring the reader every step of the way, that this is the real good old stuff.

Stid:  Easy reading, in other words!  Stuff that makes no demands on the intellect.

Zendexor:  No more does a flawlessly cut diamond.  It is a thing of beauty, not fuel for controversy.

Harlei:  And yet here we are - a discussion group.  On the verge of an argument with Stid, I suspect.

Stid:  No, no - as Hamlet says, "I am tame, sir: pronounce!"  Seriously, I do see the point, Zendexor, of your comparison with the diamond.  Only - why do you grade Hamilton as tops rather than, for example, his wife Leigh Brackett?

Zendexor:  Brackett is more intense, more innovative, and therefore committed in a certain direction, so that her strongly sinister Mars is slightly off-centre from the standard model Mars which I'm talking about.  What makes Hamilton interesting for me, is precisely his centre-focus, his - shall we say - standard orthodoxy and bland fidelity with regard to "The Model". 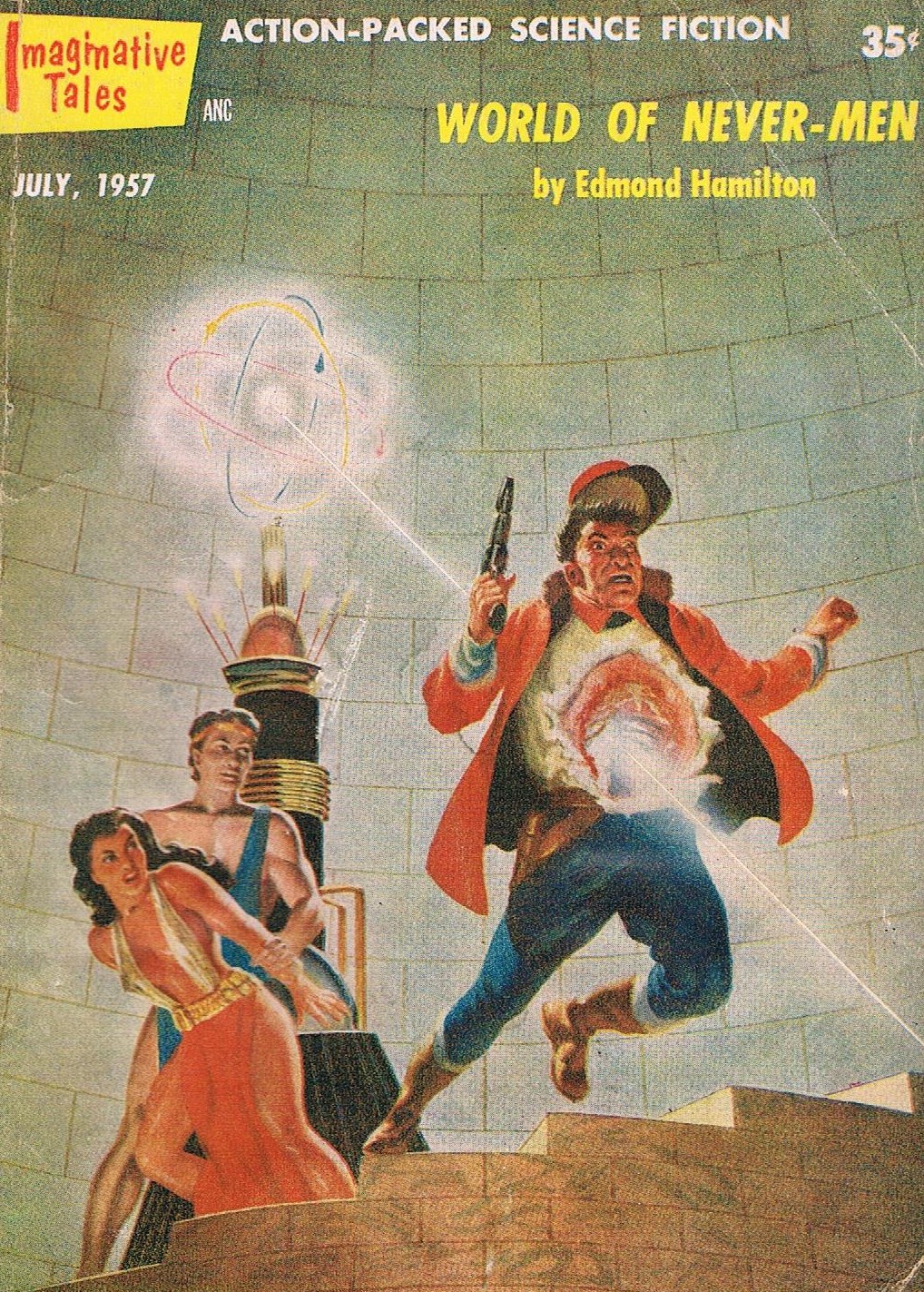 And before you jump on that word "bland", Stid, let me say I'm taking the risk of using it because I want to make the point that in this case "bland" loses its negative connotations - for what I'm saying is that Hamilton's aim, being straight at the bull's eye, attains a perfect score, the necessary perfection of an archetype, which leaves the critic with nothing individual to chew on.  Get me?  Hamilton is the least demanding of authors.  He's just thinking of the reader, all the time.  He thinks we want Mars, as in Mars, the standard model Mars, so that's what he gives us in World of Never-Men.  No more, no less.  And now I want to pin down how he does it.

Stid:  This should be instructive!  You'll be making an exact science out of it...

Zendexor:  That's what critics long to achieve, and never can - exactitude in a qualitative domain.  Well, just to tease you, Stid, I shall actually borrow a scientific term right now.  A term much used in planetary science -

Stid:  Let me guess: the accretion model of planetary character-building.  Critical mass reached when so many million clichés -

Zendexor:  Good try, but no, that's not what I was thinking of - though come to think of it I may use that later!  The particular scientific term which interests me right now is albedo.  Reflectivity.  Used as a measure of the brightness of a planetary atmosphere, relative to the solar radiation it receives.

I shall hereby derive from it the term goodolbedo, meaning the degree to which an OSS tale reflects the central norms of the sub-genre, with regard especially to the character of a planet.

And what I intend to show is that the goodolbedo of Edmond Hamilton's Mars is close to 100%.

Someone reached out a hand from the black, blind niche of the doorway and caught him as he passed.

Colin Barker crouched and whirled in the narrow darkness of the alley, leaping away from that grasp.  His gun, a solid heavy Earth-made weapon, fairly sprang into his palm.

"Come out of there," he said in rapid Martian...

A routine action-packed start to the tale, though one which naturally contains a sprinkling of references -

He was an old hand on Mars, what the lily-whites called a red-dust man, and he was not taking any more chances than his curiosity demanded.

The ingredients begin to stack up.  Hardbitten Earthman of no fixed abode.  The dingy quarters by the canal.  The Earthman's native blood-brother who comes with news of a mystery - 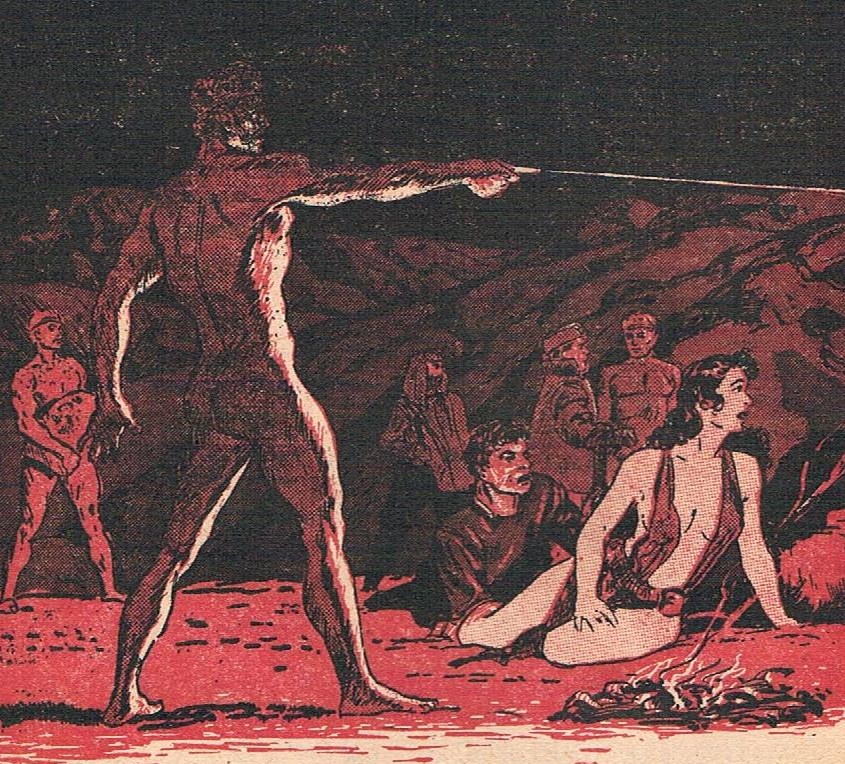 He had not changed, with the timelessness of his people.  But his eyes were shadowed, and behind his smile there was fear.

Some Martian geography next, when Arrik the native discloses that he has been followed ever since his crossing of the Bitter Sea -

Barker frowned.  The Bitter Sea was not a real sea, but only the dead corpse of one.  It was as evil a bowl of drifting dust, sand and salt as you could find on Mars, and few men crossed it.  But he could not see why that should get one followed, and he said so.

"Why," said Arrik, "you're an Earthman after all, remshi.  The littlest child in this quarter could tell you who lives across the Bitter Sea and beyond the Qed Range - the Mountains-the-Gods-Cursed - in a hidden city called Chelorne, in a hidden valley no man has ever seen since the time the last ocean dried up."

"Oh, that," said Barker.  "I know the legend.  The men without navels, the men who were made, not born.  Moonshine."

Arrik is not so sure that the legend of ancient Martian androids is not based on fact.  He tells of a strange experience he had when crossing the Bitter Sea - and that includes mention of a dust storm.

Now note the restful style of Edmond Hamilton.  I called him "nonchalantly adept" at the top of this page.  When choosing that phrase I mainly had in mind his little expansions, mini-explanations, which alternate with his action passages in a continuous systole and diastole whereby the narrative smoothly breathes.  So -

"...I was halfway through that pass when a yellow wind began to blow.  And there was no refuge."

The yellow winds were the great dust-storms.  There was always dust blowing on Mars, and that and the thinness of the air were why there was almost no air-travel on the old planet, not even by Earthmen.  But when a yellow wind blew, not even the caravans moved...

Arrik, caught in the storm, was rescued by strange superhuman beings, and afterwards when delirious he blabbed the story.  And someone must have heard.  An Earthman, hiring Martian cut-throats... 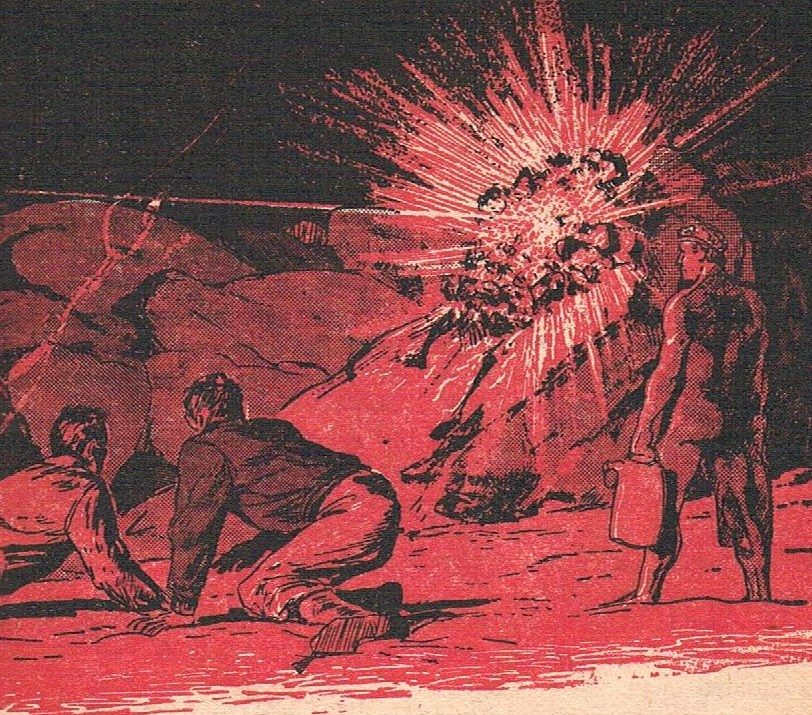 "...They believe I have knowledge of value, and they will kill to get it."

"Yes," said Barker, "I see that."  For a moment he allowed himself to become excited by Arrik's story.  Androids.  Artificial men, which modern science had for decades been trying to create, but utterly without success.  Suppose now they had been created long ago in the bright ages of Mars' past before the planet began to die, when the city-states were fierce if bloodless rivals for scientific supremacy.  Suppose the half-forgotten legends were true and androids still actually lived, hiding in the forsaken out-back of Mars.  Suppose they still knew the secret of their own creation.  What would a man not do to get hold of that secret?

As the reader must guess, murder follows, and Barker sets out on a quest for vengeance... and for Chelorne.  But this ancient-androids theme, though it provides the spine of the plot, and though it is finely handled, is not what makes World of Never-Men special.  If it were, I would be less interested in the story.

What makes it special is that it isn't special in any particular way.  It's specially non-special.

Stid:  You mean, it's a generalization of all things OSS Martian.

Zendexor:  Right.  Allowing, of course, for the fact that in addition it is a story, and therefore has a particular plot, and as far as that aspect of it goes it's plenty good enough.  Where it scores especially, though, is in the archetypal adornment of its setting.

...The clamor in the alley below was increasing.  The whole quarter was beginning to stir.  Keeping low, Barker ran away over the roofs, angling to the southeast.

To the west, on the other side of the canal, the new city threw a strident glare into the night sky.  That was Earth, transplanted into alien soil and flourishing there, bursting with skyscrapers and neon lights burgeoning with trade and enterprise, sparked with the fires of the ceaseless rockets that came and went from the port beyond.  The way Barker was going there was darkness and old Mars.  There was time and infinite secrets, drab necessity and dreary death, beauty, strangeness, awe.  He had taken this turn long before, when his beard was still downy on his chin.  Sometimes he had regretted it.  But by then he was a red-dust man, and it was too late.  He had not regretted it often.

He fled soft-footed over the flat roofs in the Phobos-light...

Harlei:  That could just as well have been written by Leigh Brackett, I think.

Zendexor:  It would be surprising, maybe, if she'd had no influence over her other half.  But in my view Hamilton's Mars, while just as crumbly and secretive as Brackett's, is less luridly sinister.  I'm not saying one is better than the other.

Stid:  But you prefer Hamilton's - I can tell.

Zendexor:  Well, darn it, I suppose I do, but it's something I'm reluctant to say - given the magnificent tales Brackett wrote, far surpassing Hamilton's Mars output in extent and range and passion.  I suppose I must get back to the main point of this page, the sort of Nirvana-like shine of the 100% goodalbedo of World of Never-Men.

(For another quote from the story, see the Edmond Hamilton page.)