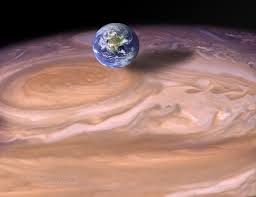 Jupiter's most famous feature, the Great Red Spot has been explored on numerous occasions by sf writers.

Its enormous size and dramatic colour have given rise to equally colourful speculation.

In Children of the Ray an expedition to study the GRS gets trapped and captured by tetrahedron-headed Jovians.

The Jovians' leader explains, telepathically, their beliefs about "the Ray" (none other than the GRS' fiery glow):

"The Ray is the eye of Tatra," he said.  "Tatra, god of creation and source of energy...

"We, the Tatrons, are the true people - Tatra's people.  Many generations ago our ancestors came from the Ray.  Our seed is generated from the Ray.  Eventually, when we are old and helpless, we shall return to the Ray..." 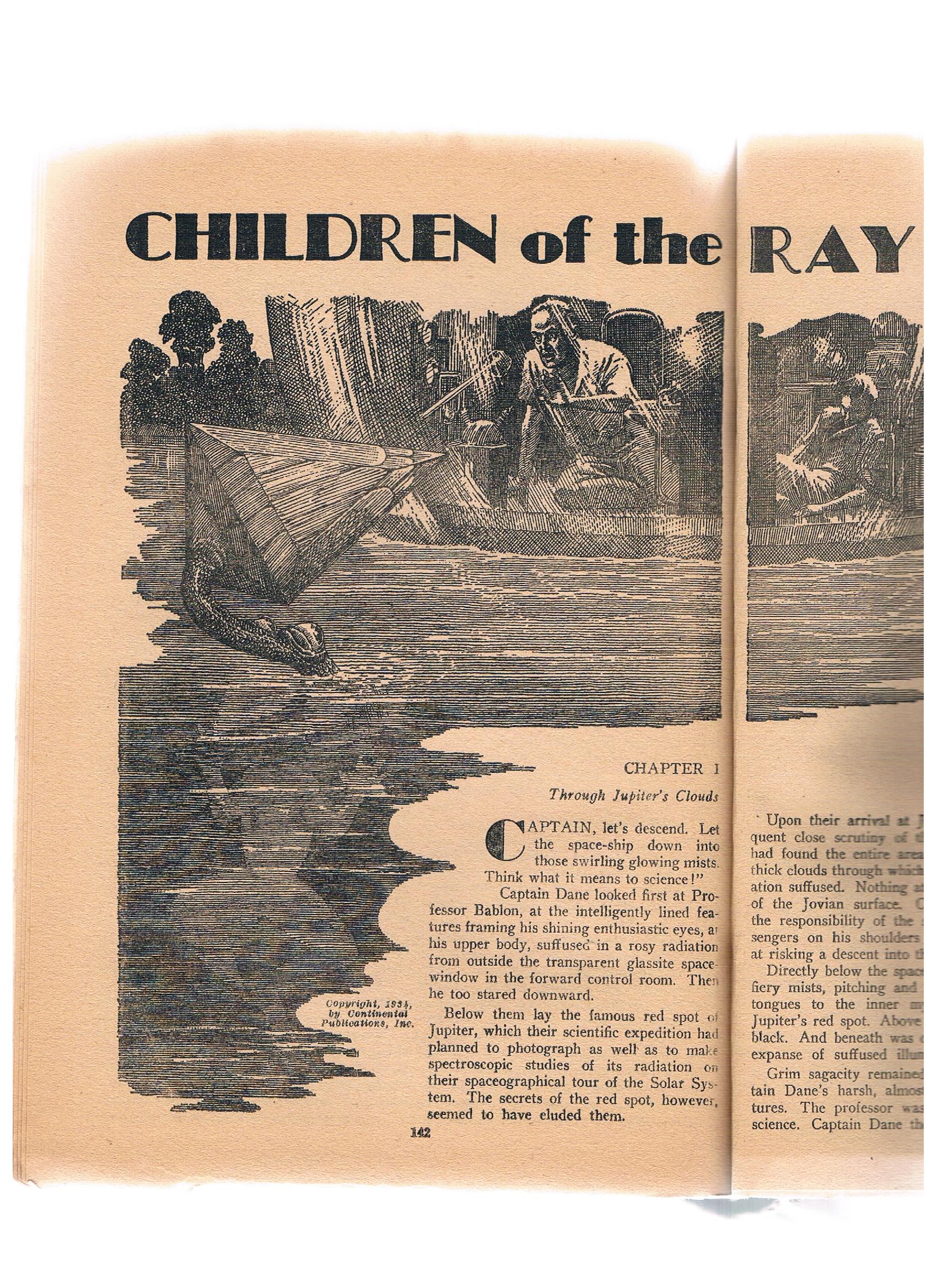 An Earthman asks the Jovians why they are afraid of the Ray if it's the essence of their existence.

At this a series of frightened awed thoughts came jumbling from the tetrahedron's mind...

"The Ray is the beginning and the end," he said at length.  "Yet we who are the real people love our life.  We would not have the ending bordering swiftly on the skirts of the beginning.  We love life.  Therefore, the Ray... is not for us till the end..  All fear it...  Yet all must go back..."

Stid:  Incidentally, prospective visitors to Jupiter will be pleased to know that according to this story, "Jupiter's air was quite suitable for terrestrial consumption".

Zendexor:  Indeed, that's the sort of Jupiter I like best.  What wouldn't we all give to have a world of that size which we could roam around in - assuming of course that we had the gravity-control units which are available to the likes of Captain Future.

Which brings me to the Fire Sea - the Great Red Spot as it is known in Captain Future and the Space Emperor, a novel set mostly on the giant planet.

Fire Sea of Jupiter!  Most dangerous and stupendous feature of the mightiest planet, which was spoken of with awe by men from Mercury to Pluto!

It stretched before them now, a vast ocean of crimson, molten lava that extended to the dim horizons and beyond for eight thousand unthinkable miles, and that extended east and west for three times that distance.  A flaming sea that was constantly kept liquid by the interior radioactive heat.

The surface of that evilly glowing red-hot ocean was rippled by little, heavy waves and boiling maelstroms.  Upon it like genii danced lurid flames, and whirls of sulfurous smoke.  Its radiated heat was overpowering, even through the filter-windows of the rocket-flier.

Captain Future gets into trouble on the borders of the Fire Sea, but a very different hero, Dominic Flandry in Hunters of the Sky Cave, fares much worse - he actually crashes into an "outlying berg" of the Red Spot itself.

Zendexor:  Yes, and this seems to me to be an original idea.  Flandry explains to his servant - a small humanoid known as a Shalmuan - that the Great Red Spot is actually a "mass of aerial pack ice".

"...What happens is that at a certain height in the Jovian atmosphere, the pressure allows a red crystalline form of ice - not the white stuff we splash whisky onto, or the black allotrope down at the surface, or the super-dense variety in the mantle around the Jovian core.  Here the pressure is right for red ice, and the air density is identical, so it floats...

"The Red Spot is  pack of flying glaciers, stretching broader than all Terra.  And we've been crashed on one of them!"

Harlei:  This may be the tightest spot Flandry ever was in.  And the way he gets out of it -

Zendexor:  We're not going to give that away here.  It would be criminal to spoil the story for anyone who has not yet experienced that masterly episode.  Suffice it to say, that it's all the more impressive, in that Anderson's Jupiter is several fearsome steps closer to realism than Captain Future's.  Admittedly there's still a solid surface, so it's not absolutely realistic, but the colossal atmosphere - the pressure, the storms, the violent murk - is authentic.  To escape from that is really something!

And in one of the significant overlaps which help accumulate an OSS idea, we also find in Bridge that the Great Red Spot is a "planetary island of sodium-tainted ice"...

For the GRS' effect upon one of the Jovian moons see Io and the Great Red Spot.