the cold white north of mars:
a review by dylan jeninga of
the king of cheap romance
by joe r lansdale

Reading it now, this Travelogue would have made an ideal Christmas edition, set as it is at the Martian north pole. Consider it a belated holiday post, then. Of course, as this is interplanetary adventure of the retro variety, it’s less about reindeer and sleigh and more about ice sharks and motorized sleds. 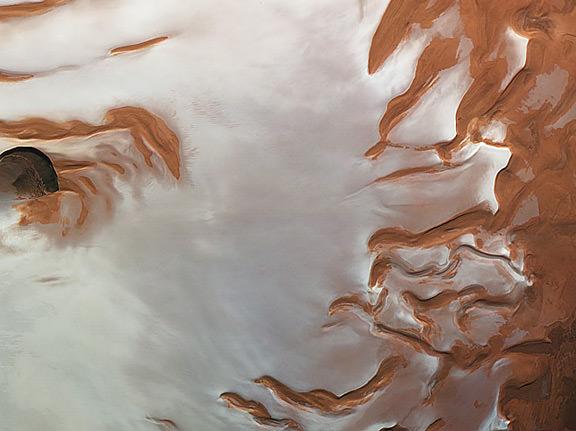 I glanced at the body and trembled. I looked at the blue ice directly in front of me, and beyond that the vast polar regions of Mars, stretched out flat, and way beyond that was the mountain rise. Past that was where I needed to go. I felt cold and miserable and sad, and for one long moment I wanted to quit. Then I told myself, that’s not what Dad would have wanted. That’s not what he would have wanted his daughter to do.

The Martian polar regions are pretty underexplored in OSS literature, Edgar Rice Burroughs took us there, but mostly underground, and Leigh Brackett took us to the edge of the frozen wastes in People of the Talisman. Otherwise, most writers opt to take advantage of the things that make Mars Mars, and red deserts and canals are harder to come by at the highest latitudes. Landsdale’s tale is unique in that it takes us on a high-speed chase across the ice sheets of Mars.

We meet Angela King just after the crash of airship that was ferrying her and her father to a settlement in dire need of a vaccine for the Martian fever. Thankfully, the vaccines survive, but sadly Angela’s father doesn’t. Angela is understandably forlorn, but with his dying words her dad spurs her onward, driven by a sense of duty to the settlers dying in their mountain town, and so she packs the vaccines and his body into a beat-up sled and sets out.

On the way, she falls afoul of an ice shark and finds the frozen remains of a Martian structure in what has got to be one of the more memorable set pieces in the book, but I don’t want to spoil things.

The King of Cheap Romance is a rugged story of survival, quick thinking, and breathless escapes. At times I felt the writing itself could be a bit hacked out, relying on the occasional cliche that didn’t feel earned. For example, the paragraph below:

We Kings, we weren’t quitters. It had been drummed into my head since birth. I looked down at Dad’s corpse, all that was left of my family, wrapped in silver bedding, lying on the sled, and it was as if I could hear him now. “Angela, put your ears back and your nose forward, and keep going. That’s how do. Just like an old mule. That’s how we Kings are. We keep going when everyone else has already quit.”

Also, her sled is remarkably versatile, even serving as a mini submersible. But perhaps, knowing the dangers of the Martian poles, such sleds were commissioned specifically for that expedition. Otherwise, it doesn’t seem like there would be a lot of call for submersible sleds on the desert planet of Mars.

The ice shark is imposing, but the truly stand-out inventions are The Climbing Bergs. Huge bubbles of ice formed by air-breathing microorganisms that occasionally rise to break the frozen surface and suck in more oxygen, before sinking again for who knows how long. Sometimes, those bergs have relics of the past inside them, as our hero discovers.

The truly remarkable feat of Cheap Romance, though, is that it still manages to feel like Mars even though there’s water aplenty. It makes sense that the poles would be the last haven of the once diverse Martian ecology, where otherwise one might reasonably ask how a giant tentacle monster is surviving in a desert with little food or water to speak of. Real deserts are mostly void of large predators for a reason, after all. If landsdale ever pens a sequel, I’ll read it happily, and he has inspired me to consider a polar Martian tale of my own sometime.

My copy of Vintage Worlds has arrived! It’s a beautiful book, and much thicker than I anticipated! If you haven’t gotten yours yet, check out this link: http://www.foundershousepublishing.com/2018/11/vintage-worlds-tales-from-old-solar.html

Dylan mentions ERB's "mostly underground" Martian North Polar region, and this doubtless is because of the unforgettable Carrion Caves (and to a lesser extent the Pit of Plenty) in The Warlord of Mars.   I would add, though, that the reader is also left with some potent above-ground imagery from that region, after perusing the third quarter of Llana of Gathol - which first saw print as the novella Escape on Mars.  After all, it's thanks to that particular adventure that we can lovingly recall scenes such as the mutiny on the flier which had been commandeered by the Warlord, the luckless warriors being "frozen in", and the fugitive John Carter making a hole in Hin Abtol's city-dome.  All rollicking good stuff.