Redemption for
Shoals
by
Mary Rosenblum

as featured in
Old Mars

A Report by Dylan Jeninga

I've reread Old Mars many times, but only read Shoals, the fifth story in the collection, twice: once when I read the collection for the first time, and most recently for the travelogue.

The first time I read it, it wasn't a favorite of mine. I don't recall exactly what I didn't like, but it left me apathetic. I suspect I was simply in the mood for more traditional Martians at the time, and didn't appreciate it properly. Going into this reading, I actually considered skipping it as usual, but I felt it would be a poor analysis indeed that played favorites.

I'm glad now that I took the time! 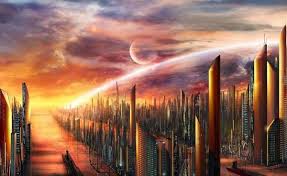 Shoals takes us to a WOM, or a worn-out-Mars, where one needs an oxygen supply to breathe outside of the plucky human settlements. It's a Mars of canals and crimson spires - and Martians, although few are able to see them.

A young boy named Maartin Xai is one of those few (I didn't notice this before, but his name is “Martian” with the letters moved around a bit). After a mining accident which killed his mother and left him stranded for a day, he finds he can see that which has not existed for years uncounted, and that a bustling Martian city sits in the same space as the human settlement in which he lives. What's more, he can interact with it, in a limited fashion.

He stood on the mosaic plaza, the tiles of shimmering green, ruby, and deep azure laid out in swirling arcs radiating from a cluster of crystal basins. Water leaped in the center of each basin, giving off the tinkle of glass chimes as it splashed back down, overflowing the rim and trickling across the plaza in snaking streams. The two Martians stood in front of him. He smiled at them, recognizing them. He'd named them Rose and Shane because he liked the names. He wasn't sure that “name” was something that they understood. It wasn't like they talked in words.

Tall and skinny as the winter trees he'd seen vids of from Earth, they pirouetted, bathing him in their smiles. Well, it felt like a smile. He pirouetted with them, laughing without his mouth because they heard that…

Among his fellow colonists, Maartin is the only one who can see the Martians. Even his own father believes them to be the hallucinatory results of brain damage from the accident. He finds his efforts to make people believe him hindered by his inability to speak more than a few words coherently, another change effected after his rescue and further evidence to his father and doctor that something is broken in his brain.

All this is merely a nuisance to Maartin, at first. He knows the Martians are real, and enjoys spending hours with them outside, strolling through their cities of glass and crystal, listening to their emotion-music and appreciating their understanding and acceptance. They may not exist any longer on the physical surface of Mars, having spirited themselves away in a sort of other-Mars through the use of gem-like “pearls”, but they are still very much alive.

Jorge was staring at them. “Live forever?” He shook his head. “They can't be alive. Like you said, they're images. Ghosts. Not real. The pearls are rocks.” He lifted his head to meet Maartin’s eyes.

He wanted Maartin to say yes. Wanted it a lot. Maartin shook his head. He studied the explanation as his fingers rippled and twined it in the air. “Spectrum.” That was close. “Energy?” Not quite.”Different spectrum. They live.”

Despite being nearly divorced from our reality, they can still be imperilled by it. The nature of the pearls, the origin of Maartin’s abilities, and the true cause of his mother’s death are all revealed in a satisfying final act that pits colonists against desperate outsiders. Without revealing too much, I'll say that it was after reading the conclusion that I was forced to re-evaluate my opinion of the story.

It's no Red Planet or Sands or Mars, but as the first WOM in the Old Mars anthology, it's a splendidly readable tale. I'll be sure not to skip it in future rereads.