the
jungle moons:
a discussion 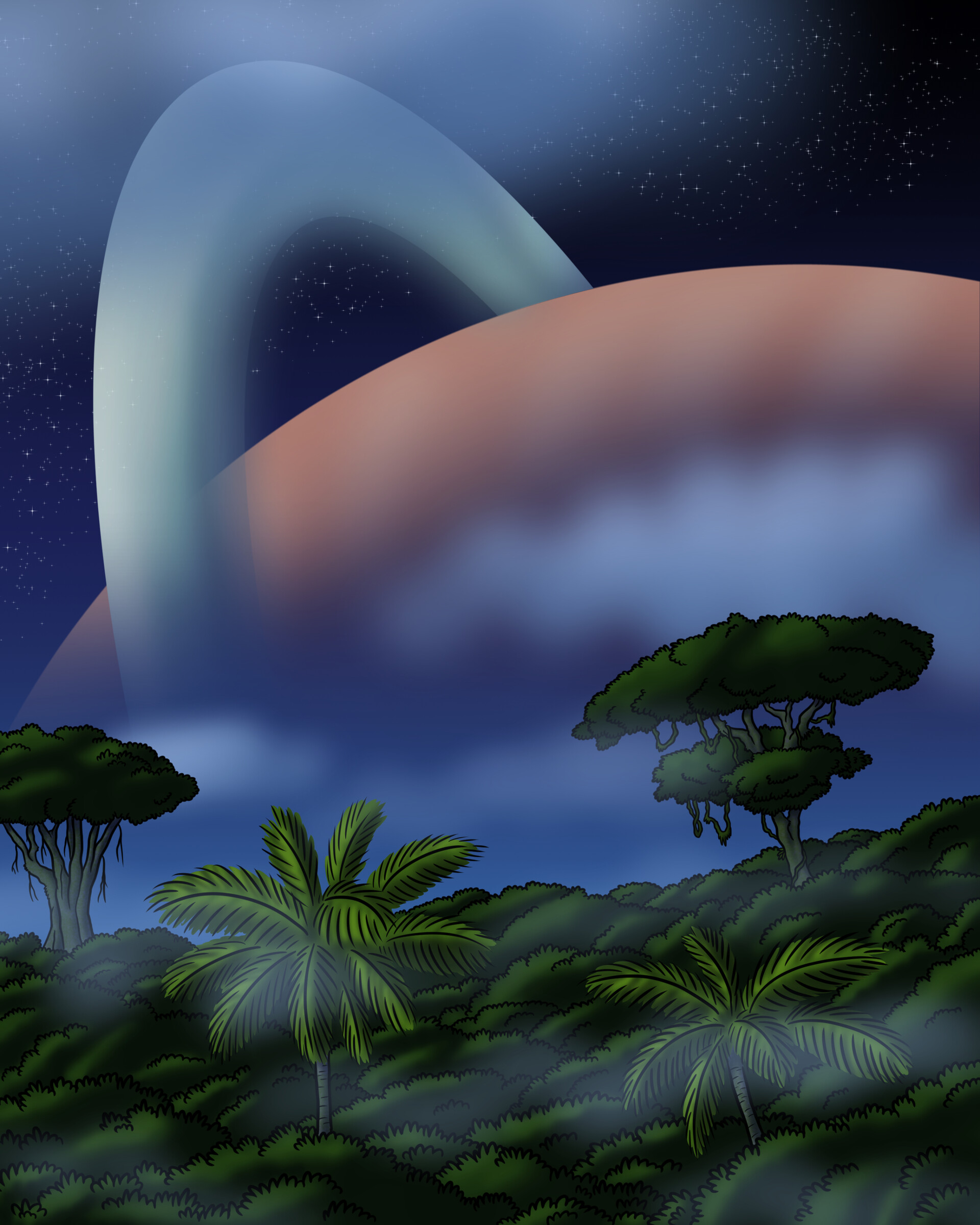 The worlds of the solar system each have their own unique personalities. Some are familiar: Mars is an ancient, dying world of crimson deserts and lost cities, Venus is a wild, mysterious, rain-drenched planet, and Mercury always faces one side to Sun. Other worlds have characters which our tireless webmaster Zendexor and his crew strive to tease out, often with little to work with but scraps and short stories.

But some archetypes aren’t confined to single planets. Sometimes, whole regions of space have a character, such as the very edge of the solar system as covered in The Outermost Reaches. Others, or rather one in particular, seem to span multiple worlds. I’ve noticed that when an OSS protaganist ventures out to one of many moons of the giant planets, he or she is likely to discover that their destination is a lush jungle world. For example, in C.L. Moore’s Yvala, Northwest Smith and his companion Yarol journey to Cembre, an unexplored moon of Jupiter, at the behest of their employers. Once there, they discover,

...They were submerged in jungle. Great serpentine branches and vines like cables looped downward in broken lengths from the shattered trees which had given way at their entrance. It was an animate jungle, full of hungry, reaching things that prang in one wild, prolific tangle from the rich mud. Raw-colored flowers, yards across, turned sucking mouths blindly against the glass here and there, trickles of green juice slavering down the clear surface from their insensate hunger...

The adventure that follows does little to develop the world further, instead focusing on an inter-dimensional monster. Despite that, the brief descriptions of Cembre which the story does provide were vivid enough to stick in my memory and get me wondering at the number of other jungle moons I’ve encountered during my literary journeys through the OSS.

My catalogue so far includes:

Callisto
-Jandar of Callisto, Lin Carter
-The Callistan Menace, Isaac Asimov (The moon is stated to be heavily forested, not jungled, but I’m counting it.)

That’s every jungle moon I’ve been able to find, although I’m sure other voracious, overgrown satellites are out there, waiting for me. If anyone would like to give me directions, I’d be most appreciative!

As is likely evident from my list, this trope owes much of its existence to the prolific Edmond Hamilton. However, as I suspect many otherwise neglected worlds are in debt to Hamilton from providing them with personality, I don’t really mind.

Dylan has identified a classic example of tradition-evolution in OSS literature. One might extend the association not only among the moons of the giant planets but also to the surfaces of the planets themselves - I particularly remember the delightful children's TV puppet series Space Patrol, in the 1960s, where Captain Larry Dart and his crew Husky the Martian and Slim the Venusian often used to visit a jungly Jupiter, a jungly Saturn, and a jungly Uranus (where malevolent intelligent leeks posed a threat). (Neptune, on the other hand, was not jungly as far as I could tell. It was probably more urban and/or park-like, populated as it was by a telepathic and rather snobbishly superior super-race.)

Then, looking at more adult material, we have the weird forest on Sassoom in ERB's Skeleton Men of Jupiter. And in Doc Smith's Spacehounds of IPC we read that the Jovian surface is "hundreds of feet deep in a lush, dank, tropical jungle". I suppose these ideas stem at least in part from the old idea that the giant planets are hot.

Hmmmm, it's possible I misidentified this trope. Perhaps this page should have been called "Jungle Worlds" instead. After all, as you correctly pointed out, it isn't just the moons which get a nice coat of greenery, it's also the giant planets, and I seem to remember the inside of Vulcan being tropical in the Captain Future novel Outlaw World.

If I may speculate as to the origins of this tradition: I suspect that making a planet primarily jungled is a quick way to color it with alien mystery, as the real jungles of Earth are among the most wild and mysterious places in the world. It also provides a story with a menagerie of exotic creatures, hidden ruins, and other useful things for a storyteller.

It also seems possible to me that the idea of the jungle world is drawn from the experience of colonialism from the perspective of western cultures. Many of the colonies of Britain or the United States (where most OSS authors lived and worked) were in nations with tropical climates, making them the "untamed frontiers" for writers in the 19th and 20th centuries. We know that it was (and still is) common to project colonialism into space; Leigh Brackett, C.L. Moore, Edmond Hamilton, and other authors did it in the OSS. It's possible that the archetype of the Jungle Moon is in fact an offshoot of that idea. I suspect I am touching on another tradition, however. It's possible one could make an entire page on colonialism in the OSS.

All that said, I wouldn't include fecund Venus in this archetype. The idea of Venus as a jungle world has very clearly traceable origins, stemming from the idea that it was a rainy world. I think beginnings really do matter when it comes to classifying traditions.

The Saturn system is not excluded from this archetype too - I can add to the list also Titan from Manly Wade Wellman's Sojarr of Titan (Startling Stories, March,1941).  Although [spoiler alert!] the jungles there in the end turn out to be overgrown Earth grasses and weeds, transferred by ancient Atlantean colonists.

I'd never heard of Sojarr of Titan; it sounds promising! Is it any good?

I kind of like the idea of Earthly weeds evolving into diverse forms on an alien planet, it's cool. Although I don't know if Zendexor would go for it, although he may find transplanted Earthly plants more palatable than humans.

Admittedly the usual COMOLD bee-in-my-bonnet (whereby I vast prefer life on other worlds to have evolved indigenously) can be applied here.  On the other hand, I also have to admit that transplanted organisms can play a dramatic part in a tale!  Moreover, if we adopt an attitude that favours results over causes, i.e. if the centre of creatures' ontological gravity (to coin a phrase) lies in their destiny rather than their origin, COMOLD may largely cease to be an objection.  I just have to make an effort to be broad-minded...