what to see on dione 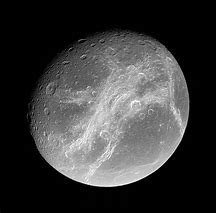 …The brown swordsmen clanned together in castles, or degs, while the red swordsmen lived in walled cities and were more civilized though none the less skilled with their swordarms…  The red swordsmen, better organized and more law abiding, had cast their lot with the civilizations of colonized Mars and Venus.  The degmen, always lawless and at odds with the red swordsmen, were allies of the space pirates.

Lindquist remained watchful.  He wondered which deg Strower was visiting.  There was probably a plot afoot to enslave more red swordsmen…  Lindquist saw Strower and the group of degmen approach a castle.  Its towers and battlements rose in the distance.  With the keen scrutiny of a hawk, Lindquist watched it grow closer.  A broken tower loomed higher than the rest.  It drew a soft exclamation from the lone space pirate…

a landing on dione

…the saucer, nearing its goal, sank through dense atmosphere.  Henrik was relieved to note that the thick blue air did not hide, though it tinted, the rising features of the landscape.

Details emerged against the bluish grey ground: its flecks of red and green became identifiable as vegetal pavilions on oblique, wide-straddled stilts, which allowed through-ways underneath and between.  Some cracks in the ground might be artificial fissures or natural rilles, crossed by plentiful bridges.  A mound of complication, briefly glimpsed before it receded over the curve of the world, had the size, dignity and regularity of a city.  As the ship lost more altitude a very few dots, about five or six, which might be native wheelers, could be seen in motion, till the field of view narrowed and, like the city, they vanished beyond the horizon's tightening noose.

Henrik would have preferred more time to digest all this, but he had about a minute in which to examine the scene in detail from the air before the vessel touched down on a flat area surrounded by some of the "pavilions".  They stood ranged against that almost dizzily close horizon which hugged any small moon…