Let me start off by wishing everyone a happy Mars Day! Today we celebrate that most alluring of planets, both as we imagined it and as it is. What better way for me to join the festivities than with another Travelogue about Old Mars? 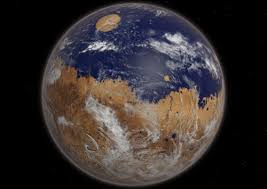 This time, we’re talking about The Dead Sea Bottom Scrolls by Howard Waldrop, a short story that brings to mind the PBS documentaries I used to watch with my parents on Saturday nights. For this documentary, we follow George Weeton, an archeologist taking a special journey from the Tharsis Bulge to Solis Lacus by means of a resurrected Martian vehicle.

What I am doing is to set out in the re-created slimshang to follow the route (if not the incidents and feelings) of Oud’s famous journey from Tharsis to Solis Lacus.

It's the most famous Martian travelogue we have (for many and varying reasons).

Oud was the first thinking commentator on the changes Mars was undergoing in his (long) lifetime. Others had noted the transformation, but not the underlying processes. And Oud’s personal experiences added much to the classic stature of his tale.

I suppose that makes my travelogue the second most famous. Ah, well. Waldrop’s Martians died out around the time of the Great Bombardment, making them long extinct by 1981, when the story takes place. The fact that anything of the Martians survived all that time is miraculous, but not entirely unbelievable, in my opinion - the loss of an atmosphere could do wonders for preservation of artifacts.

This story is unique for a couple reasons. First, it imagines a formerly inhabited Mars which supported life around the time the real one could have - something uncommon in both OSS and NSS stories. Second, there isn't any drama in it, really. We read about both Weeton and Oud completing their trips with only minor hindrances along the way, albeit their challenges are different in nature: Weeton struggles with the terrain, and Oud’s troubles are of a uniquely Martian sort.

One may ask, how can a story with stakes so low hold the reader's attention? For my part, I was captivated in the same manner as I was by the aforementioned documentaries I used to watch: the subject matter was simply so interesting and well presented. Waldrop treats us not only to a travelogue, but Weeton’s thoughts on Oud’s writings, and even a later historian’s thoughts on Weeton’s.

The story also provides the reader with an opportunity to catch their breath before diving back into the blood-and-thunder of the next tale, a NHOSS piece by James S. A. Corey. But we’ll get into that next time.

Speaking of James’s, I'd like to welcome our latest commenter to the site! I look forward to conversing on all things OSS with you, James!

I'd also like to say that I enjoyed the custom art for the article on Mercury’s nightside. It made me enjoy the page all the more to know that you had created the illustrations yourself, Zendexor.

{Comment from Zendexor: thanks Dylan for that last remark; doing the pictures was certainly great fun.  I find helium blobs somewhat easier to draw than human figures, I regret to admit, so for me as artist the more desolate the landscape the better.  On the subject of the above-discussed Mars story: the success of the documentary approach is a tribute both to the author and to the power of Mars' place in our hearts and minds.  And more generally, do we not often read blood-and-thunder action tales more for the sake of the setting than for the plot?  In fact the blood-and-thunder is often (one suspects) a mere excuse or framework on which to hang the fascinating setting, rather than the other way around.  And in those masterpieces The Sands of Mars and Out of the Silent Planet there is no b-&-th at all.  All of which tends to explain why this website is mainly about settings - though I'm also quite happy to discuss plots and suspense and derring-do.}