a harsh beauty - the unforgiving moon
by
dylan jeninga

I’m taking a break from my reread of Old Mars to point out a piece of the Lunar character which I noticed while reading Clifford Simak’s The Trouble with Tycho. I’ll transcribe the passage which held the revelation here. 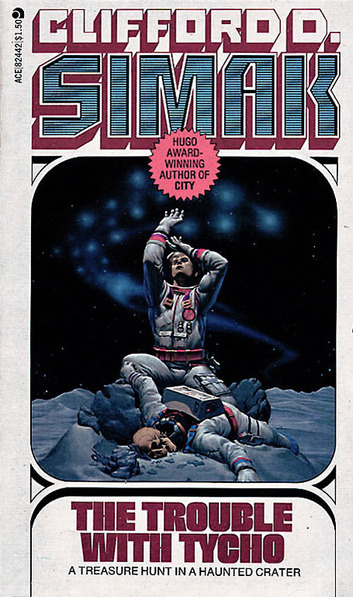 It's a mean life and a bitter one and hard, but there's a lot of glory and of beauty in the very harshness of the Moon. She is waiting for a slip to kill you, she has no mercy in her, she simply doesn't give a damn...

Indeed, it could be said that The Moon is a Harsh Mistress. Both Heinlein and Simak take pains to make that clear in their Moon books, Heinlein even puts it right there in the title! I don’t own a copy of Arthur C. Clarke’s Earthlight (though I should), but I wouldn’t be surprised if such a passage could be found in that work as well. Although, perhaps not; Clarke tended to make his settings fairly cozy, even if they were dangerous.

Here’s the thing about Luna: apart from a few older examples like H.G. Wells’ The First Men in the Moon or Edgar Rice Burroughs’ The Moon Maid, our concept of what life on our closest neighbor could be like has remained more or less the same over the decades. Sure, computers have come to play a larger part in our imaginings, but the domes and hardsuits and bleak grey landscapes have stuck around. It’s one of those stages that wasn’t really reset with the end of the golden age, and as a result I have been able to find a couple modern examples with the same “merciless Moon” theme.

The moon wants to kill you. Maybe it will kill you when the per diem for your allotted food, water, and air runs out. After all, even with the most up-to-date technology, you aren’t guaranteed to quickly hit pay dirt while mining on the Lunar surface. Or maybe you will die trapped on the fraught social battlefield between the reigning moon dynastic corporations, laid to waste in a foolish gamble against a futuristic feudal society. On the moon, you must fight for every inch you want to gain.

-Synopsis on the back cover

"How can you blame me for that leak?! Everything was fine when we headed out!”

“This is a results-oriented profession. The moon’s a mean old bitch. She doesn’t care why your suit fails. She just kills you when it does. You should have inspected your gear better.”

“So what?” I hear my own Stid-equivalent saying, “Lots of planets are dangerous, and scifi isn’t shy about it. How is this any different from, say, descriptions of the dangers of living on Mars?”

A fair question, and I say the difference comes down to personification. Yes, Mars is dangerous, but I can’t think of any examples of a character calling Mars “mean”. The Moon is also, exclusively, a she, probably a result of its mythological connections, but the god of war was male and rarely does anyone refer to the planet Mars as a man. Authors have imbued Luna with an unforgiving streak, so that she comes off not as a world but as a character in the stories in which she is featured. (Look, they’ve got me doing it!)

Of course, there’s always the chance that I just happen to have read the four Moon books which contain this theme. If anyone can think of more, I’d love to know about them.

[Comment from Zendexor:  In Clarke's A Fall of Moondust you'll find especial confirmation of your thesis.  The prose of Clarke the 'hard' scientist is yet full of the mythic persona of the unforgiving moon.]